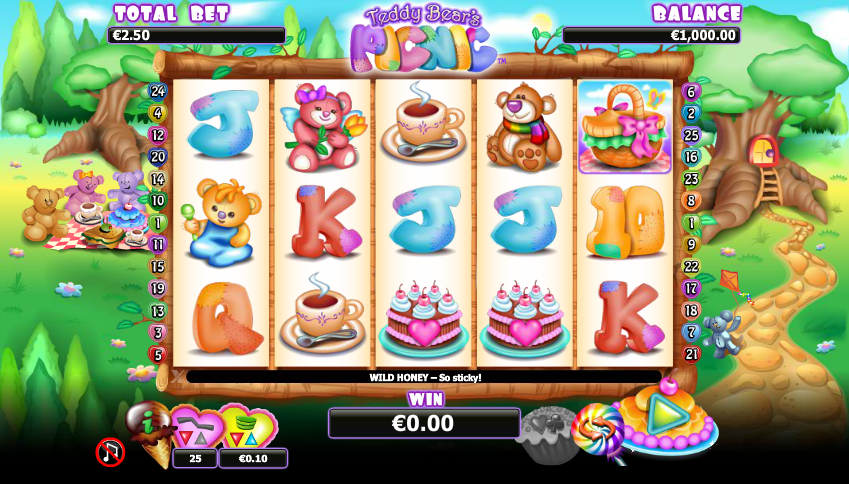 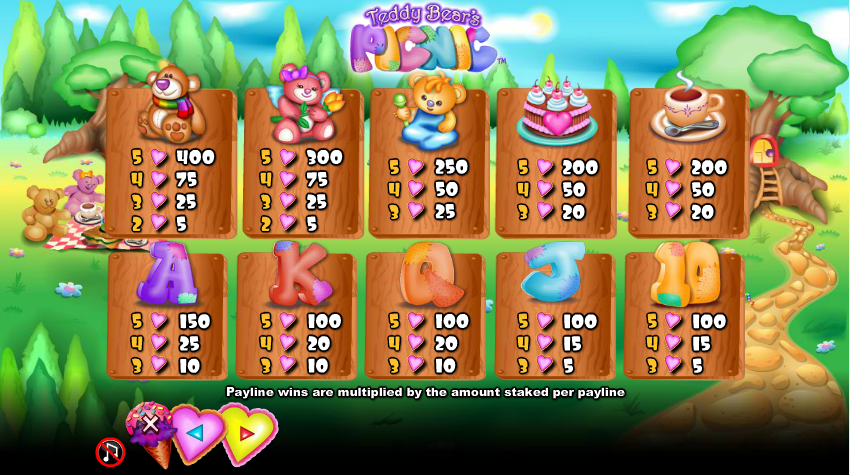 If you go down to the woods today then you’re going to need some sort of data connection to play this cute online slot from Nextgen Gaming. It’s called Teddy Bear’s Picnic and it’s obviously themed on the tune penned by John Walter Bratton in 1907 with the lyrics added by Jimmy Kennedy in 1932.

Teddy Bear’s Picnic is a five reel slot with three rows and up to twenty five paylines; the term ‘cute’ probably doesn’t do it justice – it’s all pastels, cartoon bears and a fantasy forest in the background. There is also an actual picnic taking place just to the left of the reels and the soundtrack appears to be almost the original song but not quite.

The high value symbols only raise the ‘cute meter’ to new levels and include three bears – mum, dad and baby, a big cake and a hot drink of some description. 10, J, Q, K and A represent the lower values.

The wild symbol is a piece of honeycomb which substitutes for all others except the scatter; that’s represented by a picnic basket and it’s also the key to the main feature.

This is a minor but welcome extra feature and after any spin you might see a teddy bear appear in front of the reels; he will fling a bit of honeycomb at the reels, turning a position wild, after which the reels will be re-evaluated for any wins.

Landing three or more of the picnic basket symbols anywhere in view will trigger this feature and you will be rewarded with eight free spins. As an additional bonus, any honeycomb wild which appears on the reels will remain in place for the remaining spins. You can’t trigger any more spins from within this round.

Any win can be gambled by clicking the hearts/clubs button below the reels; here you have the opportunity to double or quadruple that amount by guessing the turn of a playing card.

Teddy Bear’s Picnic is a really engaging slot which looks and sounds good; the bonus features occurred regularly during our testing which is always a plus for us. It has a decent enough RTP of 95.35%.