The global game is the theme of a fair number of online slot machines and some of course are better than others; we’ll let you decide what to make of this game from Gamomat, it’s called Gold Cup (more of a horse racing reference really) and you can find out how it all works below. […]

Before the final curtain fell on the Roman Empire after some 500 years of military expansion the Roman Legions were the world’s great fighting force so of course they deserve the tribute of an online slot machine in their honour; Roman Legion is the one we have here, it’s developed by Gamomat and you can […]

In amongst a sea of online slots with numerous bonus features and complex instructions there’s always room for something a little simpler and so we’re always happy to check out a game like Maaax Diamonds – and not only because it has a daring number of ‘A’s in the title. It’s developed by Gamomat and […]

Fruit-themed online slots are one of the links between the games we play now and the mechanical devices which started the ball rolling all those decades ago; in our minds you can never really have too many and so we’re always pleased to see one more added to the genre. In this case it’s in […]

Let us now take a journey back in time to a mediaeval age when the only power was wielded by wizards and magicians; this is the theme to Crystal Ball, an online slot machine developed by Gamomat which comes with some no-nonsense graphics and an enhanced free spins round for your delectation – find out […]

It’s always good to revisit familiar exotic locations when checking out new online slot machines and Egypt is of course one of the most common virtual destinations; we now have the chance to check out this game from Gamomat, it’s called Magic Stone and you can find out all about it below. Magic Stone is […] 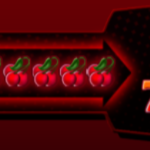 While there’s nothing particularly wrong with a cherry, it can always be improved by being transformed into a Super Duper Cherry and that special fruit just happens to be the theme of this online slot machine from Gamomat; it’s a fairly basic game with some striking good looks and you can find out how it […] 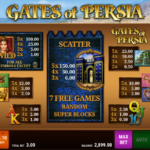 First established in the 5th century BC, the Persian Empire occupied large areas of the Middle East and arguably lasted until the decline of the Imperial State of Iran in 1979; Gates of Persia is an online slot which seeks to relive the glory days of this region, it’s developed by Gamomat and it includes […]

Before the eventual collapse of the Roman empire in the 5th century, their superbly trained armies had won battles and territory in Europe, Central Asia and North Africa for 500 years; Roma Legion Xtreme is an online slot which reflects their history and glory, it’s developed by Gamomat and you can read all about it […] 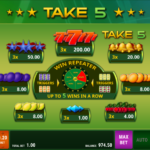 Three reels, fruity symbols and a bonus feature are often all it takes to make an engaging online slot machine and that’s exactly what we’ve got here in the shape of Take 5, a game developed by German company Gamomat. It looks basic but there are several hidden extras which you can read about below. […]