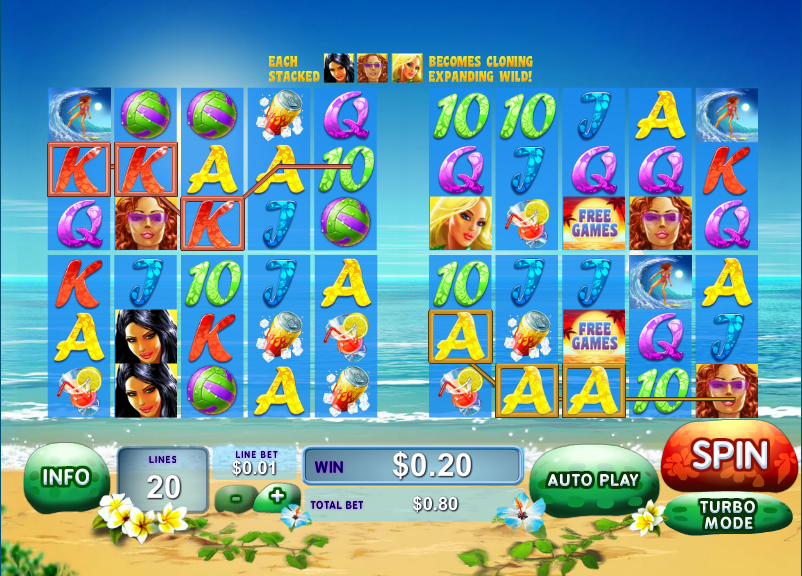 Calm blue seas, a clear cloudless sky and orchids growing in the sand; this is a desirable destination and it’s also the location of this brand new online slot from Playtech. Sunset Beach is an interesting game with a creative reel layout and a number of bonus features so read on to find out more about this new release.

Sunset Beach has five reels and twenty paylines but as you can see from the screenshot above there are four different sets of reels to differentiate this game from others. That beach setting is the background to the reels and while the basic symbols are the standard 10, J, Q, K and A, the rest are theme-related. There’s a ball, a can of pop and a cocktail.

There are three wilds represented  by three bikini-clad girls, a surfing girl scatter symbol and a Free Games symbol which activates the main feature.

A stacked symbol is one which covers the whole reel and therefore offers players more money-winning potential. The stacked wild will also reveal the sunbathing girl in full.

To trigger this feature you will need to land the Free Games symbol on reel three on all four sets of reels. There’s no multiplier on offer here but each time you land another Free Games symbol, two more spins will be added. More spins can be won indefinitely.

This is one of those addictive slots that makes you want to keep playing; we’ve found that the biggest wins come from the stacked wilds, especially if you can get more than one on the go. It’s not the most graphically advanced game we’ve played but it has some nice animations.