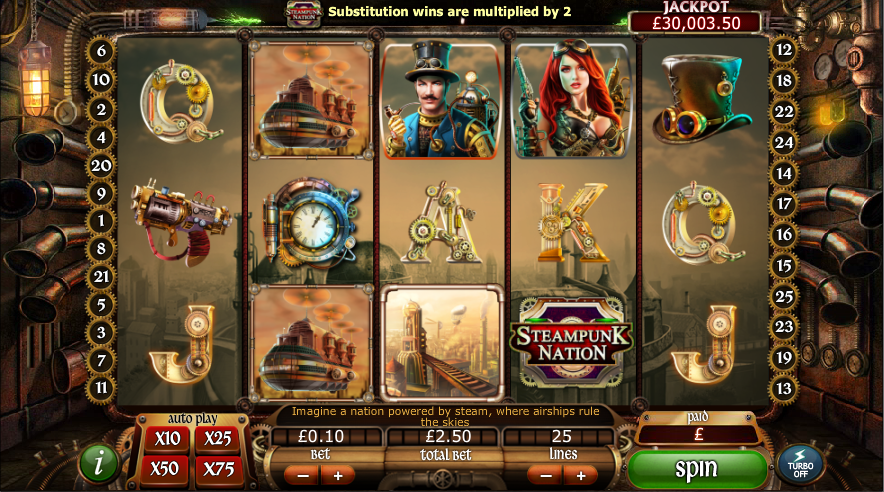 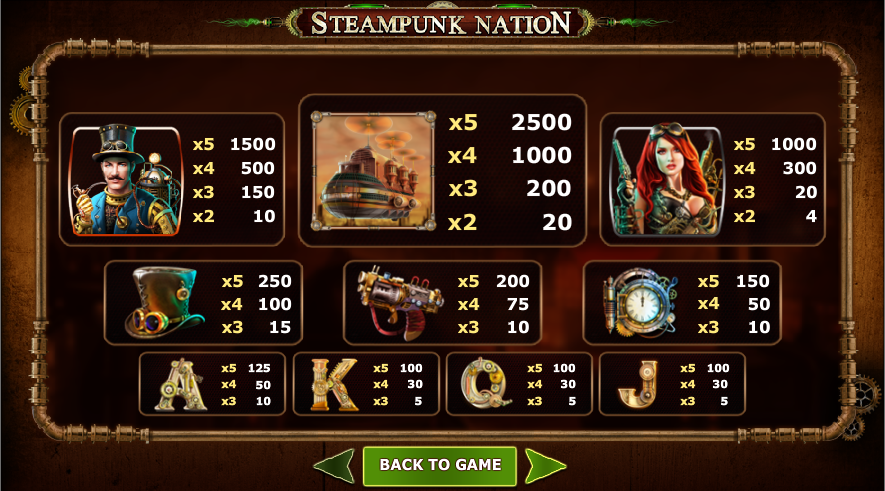 Steampunk is a slightly odd sub-genre of science fiction influenced by Victorian industrial design and it has resulted in a number of online slots such as Steampunk Heroes and Steam Tower. Now you can also play Steampunk Nation, a game developed by Random Logic and available to play at 888 Casino. It includes a free spins round as well as a progressive jackpot and you can read all about it below.

Steampunk Nation is a five reel slot with three rows and up to twenty five paylines; we are inside some sort of flying craft, the interior of which is all pipework, dials and dimly glowing lights. The reels spin on a window through which we can see the industrialised city beyond under a smoggy sky.

There are six theme-related high value symbols including the male and female characters, the flying craft, a top hat, some sort of weapon and a clock. J, Q, K and A, designed in a metallic manner make up the lower values.

The game’s logo is wild and will substitute for all others except the scatter which is represented by a landscape view of the city. Any wins including a wild will be subject to a 2x multiplier.

This is triggered by landing three or more of the scatter symbols anywhere in view for which you will receive the following:

There’s no extra multiplier for any wins during this round but it is possible to earn more spins by landing the required number of scatters once more.

You can see the running progressive jackpot total above the screen and it’s a randomly triggered payout meaning that anyone can win at any time on any spin. However you will have a better chance if winning if you play with all paylines at a larger stakes.

Steampunk Nation recreates the steampunk atmosphere very nicely with a jaunty soundtrack to match; the graphics and animations are certainly up to scratch and the free spins round seems profitable. The RTP is 95.12%.