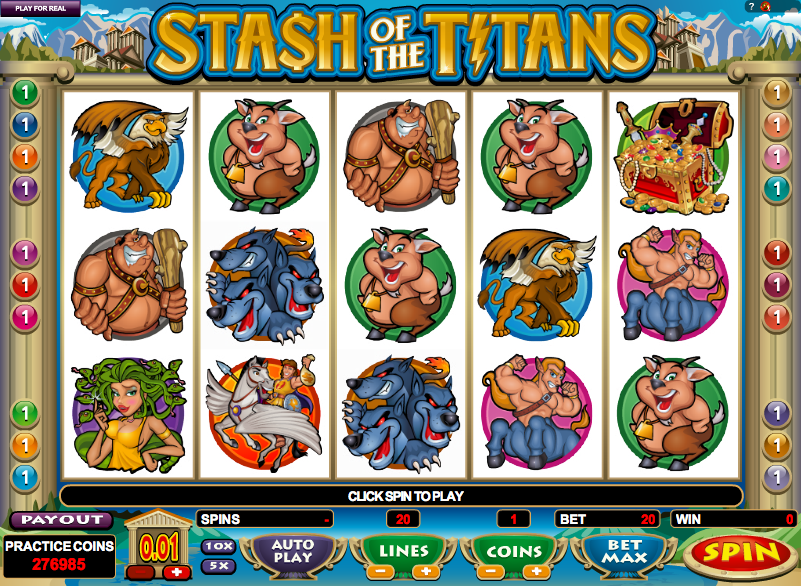 Some pretty dramatic music welcomes you when you first load up the Stash of the Titans online slot machine from Microgaming and that soundtrack sets the scene for this colourful game based loosely on the myth of the the legendary Titans from Greek mythology.  The cartoonish graphics soon let you know that this slot is more about humour than a history lesson and there’s certainly nothing wrong with that.

Five reels and twenty paylines await you in Stash of the Titans and in the background there’s the familiar view of mountains and lofty Greek temples to set the atmosphere.  The symbols are a range of characters from Greek mythology such as the Hydra, Chimera, Pegasus and Minotaur.

The Stash of the Titans logo is wild ad worth a big win and then there’s the snake-haired Medusa about whom a few words; legend tells us that she was so ugly that onlookers would be turned to stone. Here she is actually a foxy, well-endowed young lady who makes a virtue of her hair rather than a burden.

So Medusa might be unusually attractive in this game but she’s also good enough to trigger the free spins if you can land three, four or five of her anywhere on the reels.  You will then be rewarded with a pretty generous fifteen free spins and all wins you land during this feature will be subject to a 4x multiplier.

Unfortunately you can’t re-trigger the free spins from within this round.

You can alter the number of paylines in this game so if you prefer playing with smaller stakes you can do so while still playing with the same chances of landing the scatter symbols.

This is a relatively simple slot with just the one bonus game but it’s raised above the norm by the colourful graphics and animations and the dramatic soundtrack.  If you like Greek mythology you should probably give this one a go.