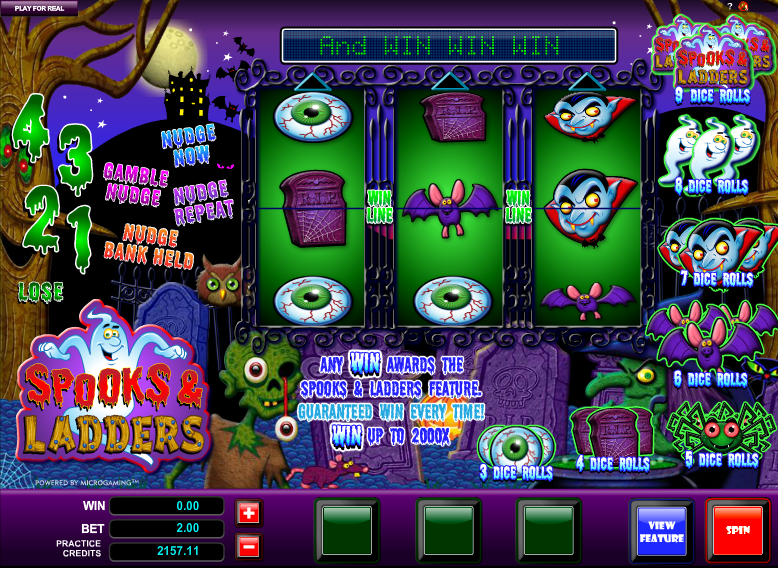 Spooks and Ladders is a halloween-themed online slot which admittedly does have three reels and just one payline but it’s so much more than that; there are loads of nudge-related features, a board game feature and a range of symbols which include eyeballs, gravestones, bats, vampires and ghosts.

There’s a spooky graveyard in the foreground and in the background three’s a haunted house on a hill in front of which fly witches and red-eyed bats.  Note that there is no prize for combos in the base game – you win entry into the main feature instead.

You’ll get lots of nudge action when you play this game and they are randomly awarded when you’re spun the reels.  There’s no auto-nudging here, you have to move the reels yourself but that works Ok.  It’s also possible to gamble your nudges if given the opportunity and if you’re lucky the feature can repeat itself.

Each time you manage to land a winning combo on the solitary payline you will win a certain number of dice rolls to take to the spooks and ladders board game.

It’s obviously based on snaked and ladders and all you do is roll the dice to try and make you way to the jackpot symbol at the top of the board.  Ladders will help you up and spooks will boot you back down again.

There’s a guaranteed win but the the more cash squares you land on the higher the prize.  Collecting three ladders, spooks, skulls or pumpkins will award a multiplier.

This is a randomly awarded respin which will spin a win; then of course you’ll activate the board game.

We don’t have much advice for a single payline machine but one thing we can say is it’s a good idea to use the nudge bank feature if you get the chance but you can only carry them over for one spin.  Also look out for the little blue arrows above the reels which can hint as to which reel to nudge.

Even the most die-hard five reel slots fan will appreciate this game – not many spins go by without a feature of some sort to keep you busy and the board game is excellent. Add in some spooky halloween music and you have a real winner.