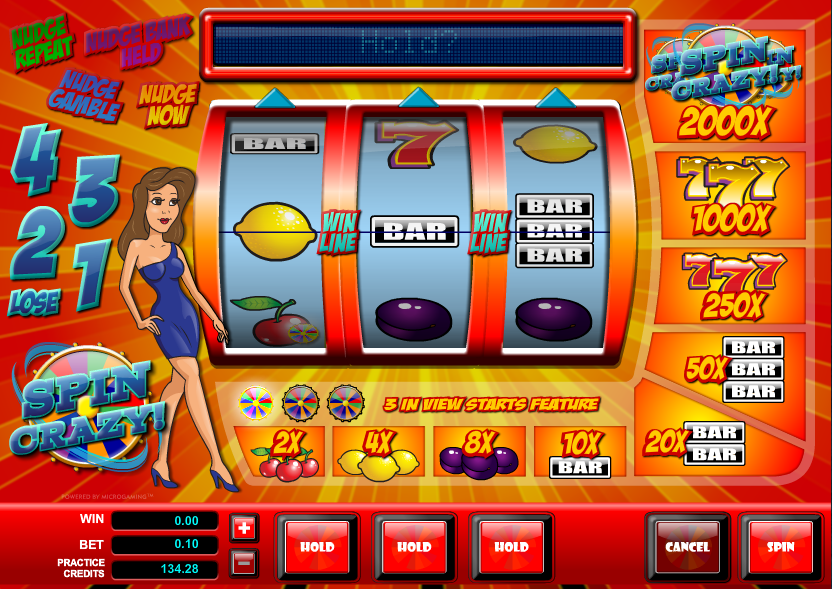 We’ve been playing a lot of Microgaming’s UK-style online slots recently and now there’s one more to remind you of that corner of the pub in which you used to stand, sticking pound coins into the slot. This one’s called Spin Crazy and it contains all the features one would expect from a fruit machine-styled game.

Spin Crazy features three reels and just the one payline but you would be wrong to imagine that that means there’s a lack of bonus features. Nudges, holds and other winning possibilities all occur in the base game and there’s also a bonus feature which is triggered by the Wheel of Fortune scatter symbol.

Cherries, lemons, plums, bars and sevens make up the traditional symbols and then there’s a Spin Crazy logo which will win you 2000x your bet.

You will notice that there are small Wheel of Fortune scatter symbols attached to some of the symbols on the reels; land three of these in view and you will trigger this feature. It’s best demonstrated by viewing the video below but essentially you play a Wheel of Fortune game ands each segment wins you different opportunities to make money.

You can choose to decline the prize and continue but if you land on a segment which has been used previously, it’s game over. The segments are colour coordinated and match the three areas to the right of the screen.

Nudges are offered to the player regularly in the base game and these can be used to jog the reels down a certain number of placed to try and make a winning combo. Nudges can be randomly repeated, gambled or banked to be used on the next spin.

Holds are awarded randomly and allow the player to freeze one or more reels and spin the others to try and land a win.

You will see ‘Shifta’ written in the light board above the screen and this means a guaranteed win is on it’s way; it’s randomly awarded but always welcome.

Watch the notice board for this bonus, you will be tempted to use the Hold buttons but don’t do it! Just spin the reels and gratefully accept the win.

Rather tha focus on winning combos, look out for the little scatter symbols and try and get them in view. You can do this by using the holds and nudges carefully and you should find yourself triggering the feature pretty regularly.

We’re always keen on these slots, probably because we remember losing our pay packets in those good old real life fruit machines; there’s loads to keep players interested and it always seems like you’re winning money, even if you may not be.