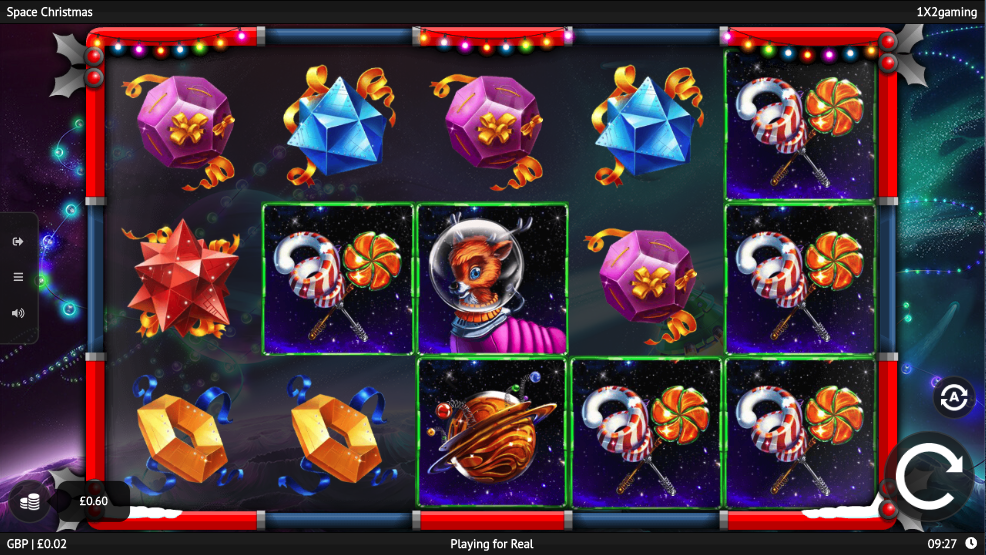 If you thought that seasons only applied on the surface of planet Earth then think again – there are parts of the galaxy where Christmas is celebrated with as much enthusiasm as back home and that’s what Space Christmas is all about; it’s an online slot from 1×2 Gaming which offers players cosmic free spins and an interplanetary picking round.

Space Christmas is a five reel slot with three rows and twenty fixed paylines; those reels spin above the surface of an alien planet over which float strings of fairy lights to illuminate the infinite darkness.

All the symbols are related to the theme and include Santa, a snowman and a reindeer in spacesuits, a ringed planet, some candy and then four tree decorations in various colourful, geometric shapes.

The gold star is wild and it will replace all standard symbols to help form winning combinations; the metallic Christmas tree and Santa’s motorised sleigh are the special symbols.

Landing three, four or five of the metal tree scatter symbols anywhere in view will award 10, 14 or 18 free spins respectively; during this round the wild symbol will lock in place for one more spin whenever it lands.

This feature is triggered by landing three, four or five of the motorised sleighs on an active payline and you’ll now get to play a picking round in which you’ll get five chances to pick from the objects available to win prizes.

There are probably better seasonal slots than Space Christmas but if the festive spirit is with you and you’re committed to games of this genre then it’s worth a few spins – the bigger wins occur during the free spins round.