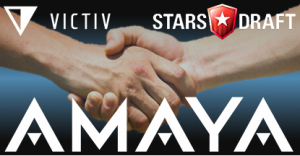 Victiv will be rebranded as StarsDraft and interestingly the new operation will introduce real money online gaming (on fantasy sports) into the U.S. market.

Amaya has also announced the imminent release of a mobile casino within weeks after exceeding expectations in it’s online casino operations.

Scientific Games, owner of online slots providers such as Bally technologies and WMS Gaming have reported Q2 revenues up 66% when compared to the same period last year and $32.8m more than Q1.

The acquisition of Bally has been one of the driving forces of the increase and this includes significant cost savings such as the elimination of duplicate positions within the companies.

Back in April 2015 IGT merged with Gtech SpA to become IGT Plc and have reported increased revenues of $1.29bn, up from $945.32m in the same period last year.

Bet365 has been granted a Maltese Gaming Authority (MGA) sports betting license to complement it’s Gibraltar license. A Bet365 spokesperson said that this was to “obtain and maintain certain regulatory approvals as well as support  it’s operations in the evolving global regulatory environment“.