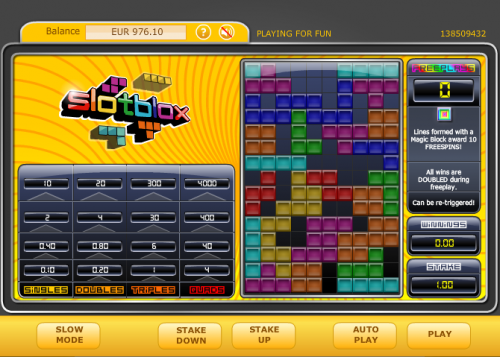 If you’re looking for something a little different from the usual slot machine today then Slotbox from Ash Gaming might prove to be just the tonic.  We all like the five reels slots with the accompanying graphics and bonus games but occasionally something a little more laid back is called for.

Slotbox is the type of game which is visually appealing enough to watch for ages; the first time you see it in action it will be clear that it’s based on the classic arcade game Tetris with coloured blocks of different shapes dropping from the top of the screen to form winning combos.  In this case the combos are formed when solid horizontal lines are created, just like in the original game.

It’s a fairly simple concept but nicely designed; the screen with the dropping blocks is set to the right of centre and to the far right you can see details relating to your stake and current winnings.  On the left of the screen is the paytable and this gives a good indication of the prizes available and how the game works.

There are four possible winning combinations – singles, doubles, triples and quads which are obviously combinations of one to four lines.  As you can see by the paytable, each win has it’s own column and the increasing prizes show what happens if, for example, you get two, three or four singles in the same spin.

Quads are of course the hardest to achieve and landing four of these on the same spin will win you the impressive sum of 4000x your stake.

There’s also a bonus feature which can be triggered by landing a winning line which includes the Magic Block; this will win you 10 free spins during which all wins are doubled.  It’s also possible to re-trigger the spins by landing another Magic Block in a winning combo in this phase.

This is an ideal diversion from the more standard online slots and we’d recommend anyone giving it a go, if only for a few minutes. Those who were Tetris fans will particularly appreciate Slotbox.