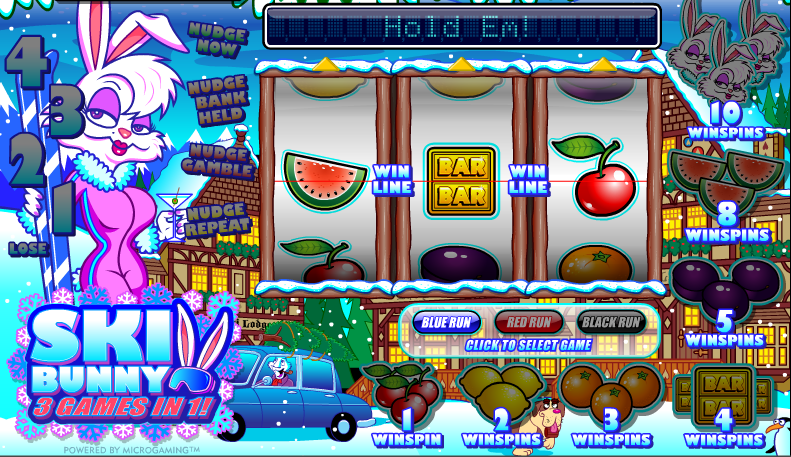 Ski Bunny is an engaging online slot from Microgaming and it’s one of a number of a particular genre that are particularly popular with UK players. The three reels, nudges, holds and a simple bonus feature are similar to the fruit machines we’ve been playing here for many years. Microgaming seem to have a really good handle on this style and that’s good news.

Ski Bunny has three reels and just the one payline and the setting is an alpine ski resort; the curvy ski bunny herself occupies the left of the screen in a pink outfit. The symbols are traditional in the base game – cherries, lemons, oranges, bars, plums and melons – but the top prize is the ski bunny.

Activating this feature is really the main aim of the game and you will notice that there is no prize for creating winning combos in the base game. Every time you do land a win it will be worth a certain number of ‘Winspins’ ranging from one to ten.

As you can see from the video below you will now move to a different screen with different symbols and you will get to spin this set of reels the number of times determined by your original win. This set has five reels and five paylines, every spin is guaranteed a win and usually you will get more than per spin. The prizes are multiplies of your bet from 1x to 500x.

You will regularly be awarded between one and four nudges and the opportunity to hold reels; nudges allow you to jog one reel down at a time in a effort to create winning lines. Nudges can also be repeated, gambled and held over for one more spin.

Randomly awarded ‘holds’ allow you to freeze certain reels and respin the remaining ones for the same purpose.

Randomly, one reel will be held and the other two will spin to match it and guarantee a win.

If you see ‘Let ’em Spin’ on the little noticeboard, do not hold any reels and just spin – it’s a guaranteed win.

Use the nudges wisely, they don’t often help out much but they do sometimes. Also look out for that Let ’em Spin sign – don’t be tempted to use that hold button you’re offered.

These type of slots are great fun; there’s always something going on and it’s almost as good as sticking a couple of quid in the machine in the corner of the pub. If you’re not familiar with nudges and holds, now’s the time to check them out.