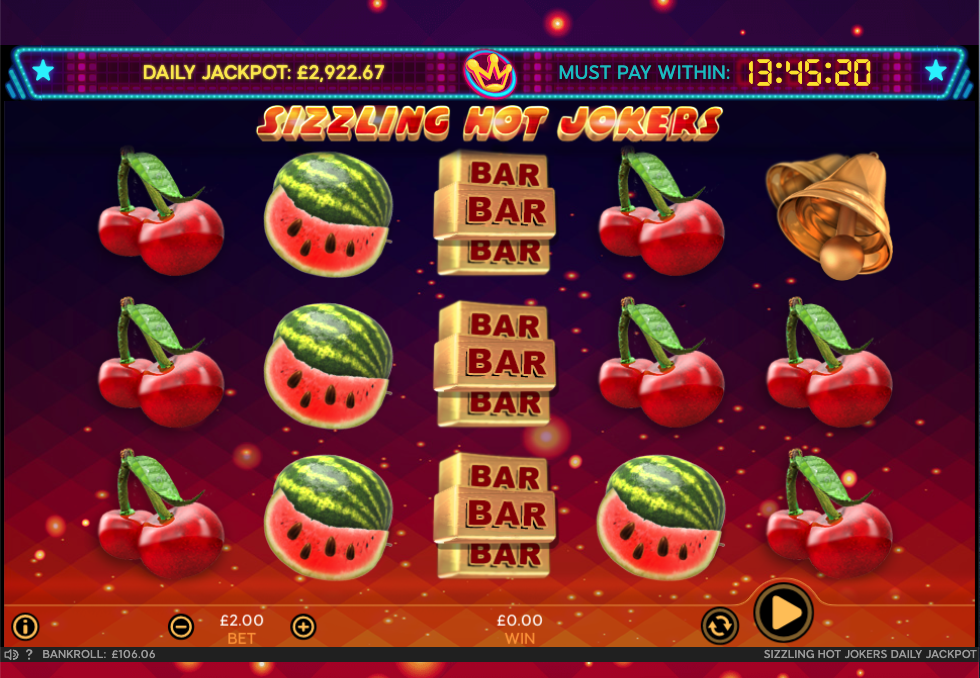 Fruit and progressive jackpots are the twin themes of this online slot machine from Random Logic/Section8 Studios; it’s called Sizzling Hot Jokers and aside from healthy snacks it offers players a Joker Wild bonus feature and a chance to win the big bucks before the timer runs out.

Sizzling Hot Jokers is a five reel slot with three rows and ten fixed paylines although paylines run in both directions; the large fruity symbols float against a sparkling, hazy red backdrop which brings to mind being dunked in a fizzy drink.

Aside from the cherries, watermelons and limes there are some familiar and traditional symbols in play here such as red sevens, gold bars, horseshoes and golden bells.

The Joker is wild, he appears only on reels two, three and four and he’ll replace all other symbols to help create winning matches – he also has a feature attached which is explained in a bit more detail below.

Every time a Joker wild symbol appears on the reels it will expand to cover all positions there; after any payouts a respin is awarded with that expanded Joker symbol locked in place. If any further Jokers land the process will continue until all three central reels are fully wild or no more Jokers land.

Sizzling Hot Jokers tempts players with a daily jackpot which must be won within the time counting down above the reels; it’s won randomly but your chances of winning it increase with the size of your stake and the time left.

Sizzling Hot Jokers is actually quite a simple slot but it looks great with those big symbols swimming around in a can of pop; the Joker Wild Respins seems to hit regularly to produce lots of small wins when combined with paylines which pay in both directions.