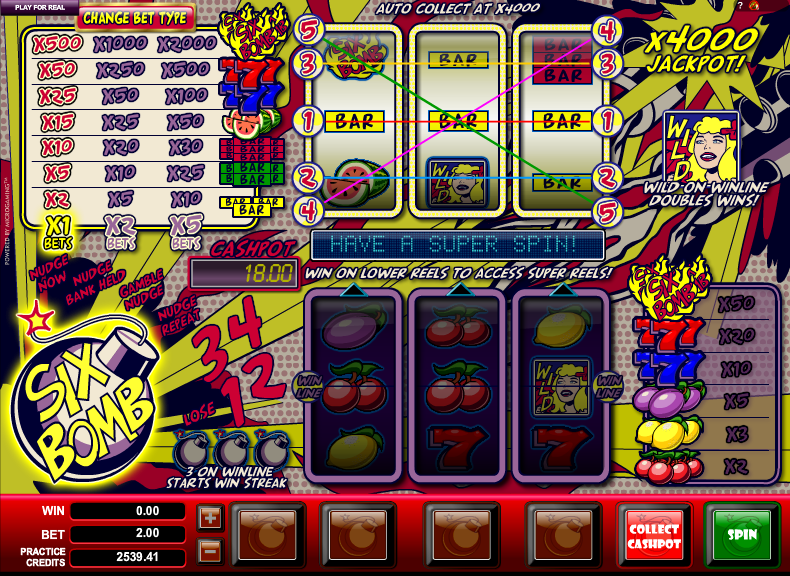 There’s always room for something a little different when it comes to paying online slots and Six Bomb from Microgaming is just that; it’s a three reel slot with a number of bonus features and it’s the nearest thing we’ve played to genuine UK-style fruit machine. The different aspects of the game can take a little getting used to but that’s why we’re here to help.

At it’s most basic, Six Bomb is a three reel game with six basic symbols – cherries, lemons, plums, blue sevens, red sevens and the Six Bomb logo.  There’s also a blonde girl wild symbol and a ticking bomb which kicks off one of the features,

A number of fruit machine type bonuses can affect the basic game and these will be familiar to UK players:

If you win some money on the lower reel’s single payline, you get the chance to either collect your winnings or move to the upper reels for some bigger wins.  The winnings from the spin will be your credits for the upper reels so if you’ve won £10.00 and your bet amount is £2.00, that’s five spins before your money runs out (unless you win more of course).

While in the upper reels you can adjust your bet level from 1x – 5x your current bet and the prizes on offer increase proportionately. The symbols on the upper reels are yellow, green and red Bars, melons and once again the sevens and the Six Bomb logo.

A couple of things to say here – firstly don’t be tempted to spin away all your winnings when you make it to the upper reels, that way lies disappointment. Perhaps spend 50% of your winnings and keep the rest.  Secondly look out for the small blue rows above the reels when nudges are awarded; if there’s just one that’s a clue to a winning move.  You will inevitably find though that you are often one nudge short of a winning combo.

We really like this Six Bomb; it’s draws you in with the simplicity of a three reel slot but ambushes you with lots of bonus features.  Like fruit machines? Then you’ll love this.