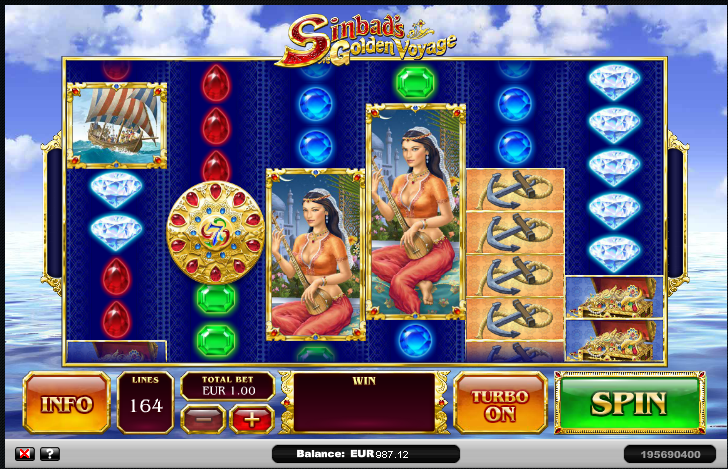 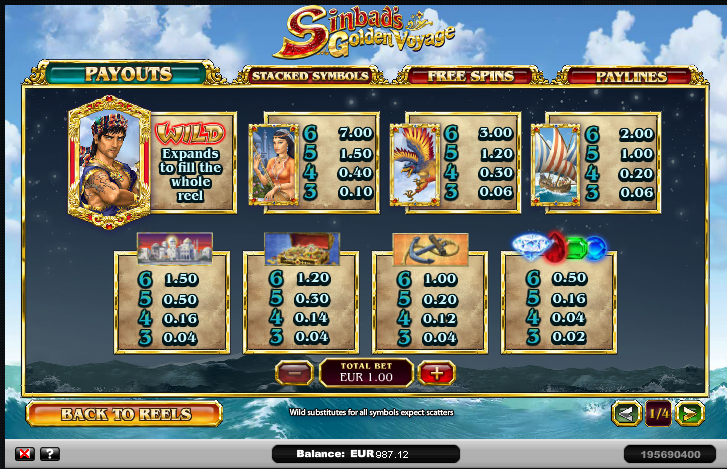 Online slots featuring Sinbad always seem to be of a high quality – check out Quickspin’s Sinbad – and perhaps it’s something about the theme which offers plenty of scope for creativity. Sinbad’s Golden Voyage is a brand new release from Ash Gaming which may be based on the 1973 film. It has an interesting reel structure and some lovely graphics so keep reading for more information.

Sinbad’s Golden Voyage is a six reel slot with 164 paylines. As you can see from the screenshot above alternating reels have either six or seven rows hence the rather odd number of paylines. A calm sea and a cloud-dotted sky form the nautical backdrop to Sinbad’s next trip.

There are six high value symbols including an anchor, a treasure chest, Sinbad’s ship, a giant bird, the princess and a view of his home, Basrah. Blue, green, red and white jewels make up the lower values. All symbols are stacked on all reels but in increasing sizes so the biggest stack on reel one is two high while on reel six all position can be covered.

Sinbad himself is wild and can expand to fill the whole reel if a win is possible; the golden shield is the scatter which appears only on reels two, four and six.

This feature is triggered by landing three of the golden shield scatter symbols anywhere on reels two, four and six. You will now receive seven free spins which may not sound that generous but during this round the stacked symbols are reversed. This means that reel one can have a stack of seven down to a stack of two on reel six.

Additionally the giant leviathan wild can appear with the potential to cover up many positions on three reels, turning them wild for big wins.

This is another enjoyable Sinbad-themed slot with some nice (but not state of the art) graphics and some dramatic sound effects. Our experience so far has been that the big wins are found in the bonus feature and there’s a nice high RTP of 97.01%.