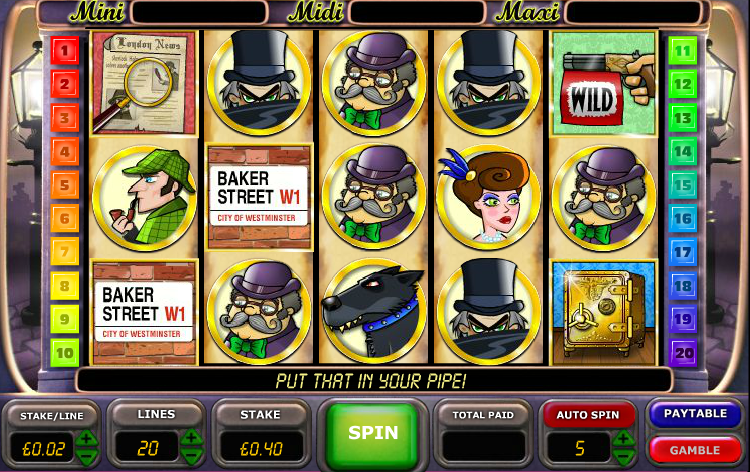 We haven’t players too many OpenBet online slots over the years but the ones we have tried have generally been enjoyable and creative. Sherlock’s Reel Mystery is one more to add to the list and it’s a fast-moving game which of course features the talents and problem-solving skills of Sherlock Holmes of 221b Baker Street. There’s also several bonus features and a progressive jackpot to contend with.

Sherlock’s Reel Mystery is a five reel and twenty payline game which looks great; fog-shrouded lamplights occupy the background and there are some entertaining symbols on the reels. all of which animate when they form winning combinations.

Those symbol include Inspector Lestrade, the Baker Street sign, three cases labelled with Q, K and A, Dr, Watson, a fierce dog and Moriarty.

The wild is a gun emitting a ‘wild’ flag and there are four bonus symbols – Sherlock Holmes, his violin, a safe and a magnifying glass.

Landing three or more of the violin scatter symbols anywhere on the reels will reward you with between 10 and 60 free spins. They will start immediately and you will notice the appearance of Super Wilds. When a wild lands on the reels it will remain in place for the the number of spins determined on that symbol and in this manner you can have several on the reels at once to help you with the big wins.

This is one to watch rather than to to interact with and you can trigger it by landing three or more safe scatter symbols anywhere on the reels. Moriarty will now wander across the screen looking suspicious and start the process of blowing open all the safes. When that’s done you will receive a prize of between 4x and 20x your total stake.

This is the main feature and is activated by landing three or more of the Sherlock Holmes symbols anywhere on the reels. You being the game by making five guesses about Moriarty’s disguise and whether you are right or wrong will help you try and identify the master criminal in the final part of the game. You can win between 5x and 500x your total stake depending on your correct guesses.

The key to the big bucks is landing three or more of the magnifying glass symbols as follows:

There’s a small amount of skill involved in the Sherlock bonus game; if you can get enough correct guesses from the first five questions, you may be able to narrow down the options in the final pick. Don’t just pick randomly if there are pointers towards the correct suspect.

This is a brilliant slot and a great way to spend some time and money; it looks good, contains lots of animations and has some really creative features. Definitely worth checking out.