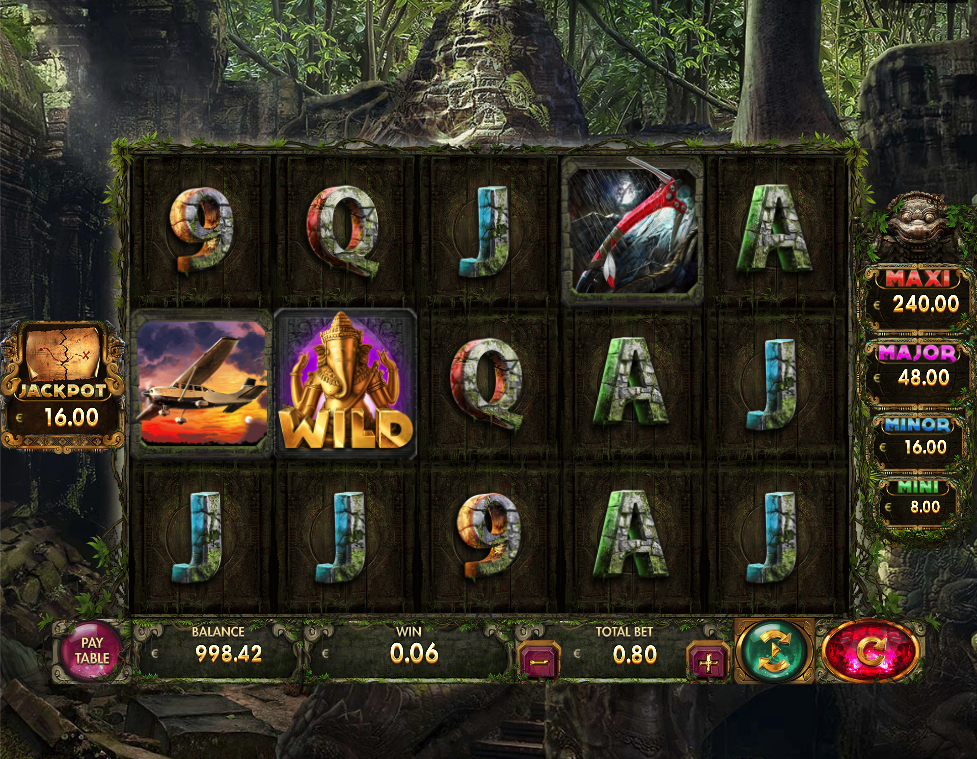 The ancient temple complex of Angkor in Cambodia is the setting for this online slot from Red Rake Gaming which brings to life the giant roots and and broken stones of this amazing place; it’s called Secrets of the Temple and it promises players free spins, wild multipliers and the Secret Minigame where the jackpots can be won.

Secrets of the Temple is a five reel slot with three rows and 243 ways to win; behind those moss-covered reels is one of the many temples gradually being reclaimed by the surrounding jungle.

The theme-related symbols include the intrepid explorer, her aeroplane, her compass and her pickaxe; 9, 10, J, Q, K and A hewn out of stone make up the lower values. The golden statue of Ganesh is wild, it appears on reels two, three and four and it will replace all standard symbols to help make winning matches. The bonus symbol is the temple.

A stack of golden wild symbol may sometimes land on reel three and when it does there’s a chance that it will activate the Secret Minigame; this is a picking game in which you will be asked to select from the gold coins in view until you’ve found three matching ones which will determine which of the main jackpots are won – Mini, Minor, Major or Maxi.

The Grand jackpot can only by won by landing map symbols on reels one and five at the same time.

Mystery symbols will all transform into matching ones when they land, hopefully helping out with a win.

Landing three temple bonus symbols on reels two, three and four will award eight free spins initially although one more will be awarded each time the temple lands on reels five during this round.

2x and 3x multiplier wilds can appear on reel three and they’ll multiply any winnings they take part in.

Despite its incredible history and amazing sights, Cambodia rarely features in online slot machines and we’re pleased that Red Rake Gaming have made the trip with Secrets of the Temple; it’s great graphics and animations are complimented by lots a bonus features and jackpot opportunities.