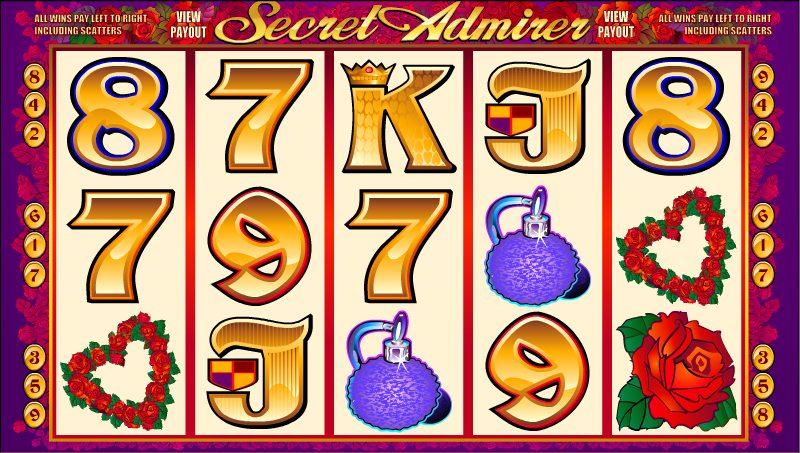 If Valentine’s Day has once again passed you by with no pleasant surprises then perhaps a little romantic fantasy could be just the tonic. Microgaming’s Secret Admirer is an online slot full of flowers, perfumes and diamonds and although it’s not the first game of this genre we’ve reviewed, there’s no harm in adding another one to the list.

Secret Admirer plays out over five reels and just nine paylines and the backdrop to those reels is a bed of roses, hopefully with the thorns removed. The design is typical of Microgaming slots of a certain age in that the reels and symbols take up all the screen space but it does result in a big and colourful game.

The lower value symbols are playing cards from 7 – Ace but the higher values are theme-related and include a rose, perfume, a heart bouquet, a brooch and a Secret Admirer heart.

The scatter symbol is a sparkling diamond ring and then there’s a mask wild which substitutes for all other symbols except the scatter.

Just three spins are awarded initially but don’t be disappointed – read on to find out why this feature can be pretty profitable.

You will need to land two or more of the diamond ring scatter symbols and you spins will start automatically; those scatters will be held in place and will award a win on each spin. Land another scatter and it will also be frozen and the spin counter reset to three again. If you are lucky enough to get five diamond rings frozen on the reels you will get three more spins to earn as much money as possible.

After any win, including the feature win, you can click the ‘Gamble’ button underneath the reels to play a card prediction game. Pick the correct colour to double your money but if you lose you will lose all your winnings.

Take care with the gamble feature – using it after every win is the surefire way to deplete your bankroll.

This slot may be a little dated but it’s good fun and the feature does seem to win quite a bit of money for players. Worth checking out.