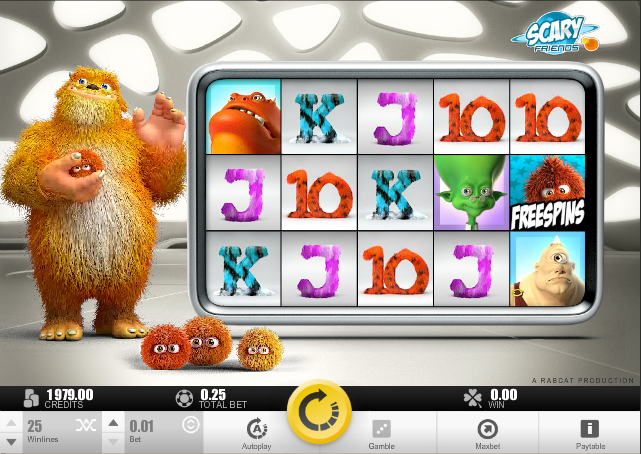 If Scary Friends is an indicator of the level of quality we can expect from new online slots in 2014 then we should all be pretty happy. This game from Rabcat contains some of the best animations we’ve seen and it features a number of actually not-very-scary creatures who could have stepped straight from a Disney movie.

Scary Friends plays out over five reels and twenty five paylines and it’s immediately noticeable when you load it up that there’s a giant hairy monster loitering to the left of the reels. He takes up so much space that the reels look a little small but that’s a minor gripe. Smaller furry creatures bounce around at the foot of the screen.

10, J, Q and K and the lower value symbols but the rest are all monsters and include a fat orange one, a Mekon-like green one, a brown cyclops, a pink one and then our furry friend standing by the reels. He’s also the wild symbol and will replace everything except for bonus and freespin icons.

The bonus symbol features all four standard monsters and the Freespin symbol shows one of the smaller furry creatures.

Three of the free spin scatter symbols anywhere on the reels are needed to trigger this bonus and as soon as you do you will see one of smaller furry creatures begin to bounce on a piece of apparatus next to the reels. The number of times he bounces determines the number f spins you are awarded between three and fourteen.

During the spins you can activate more spins and you can also trigger the Scary Friends bonus.

Three or more of the bonus scatter symbols anywhere on the reels will kick this mini-game off; you will be shown a screen displaying four monsters sitting in a wheel. You must pick the one you think will hang on the longest when it starts spinning. The longer your monster lasts, the bigger your prize.

You can gamble your most recent win by clicking the ‘Gamble’ button underneath the reels; here you can try and double your money by guessing whether the next card drawn will be red or black. Five correct tries are possible.

This is a great looking game with some appropriately weird sound effects and two distinct bonus features. If this is what the future of online slots looks like then that can only be good news.