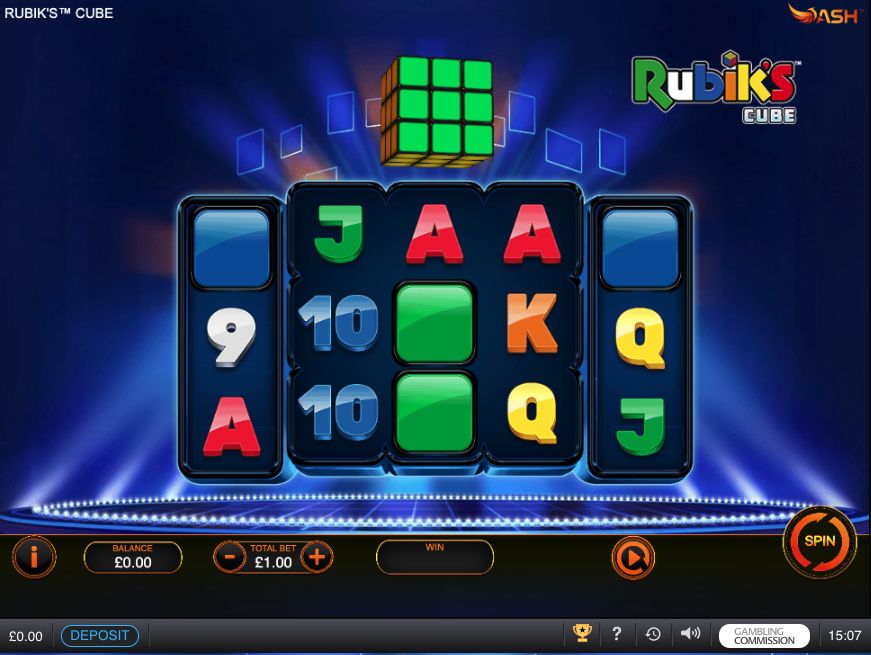 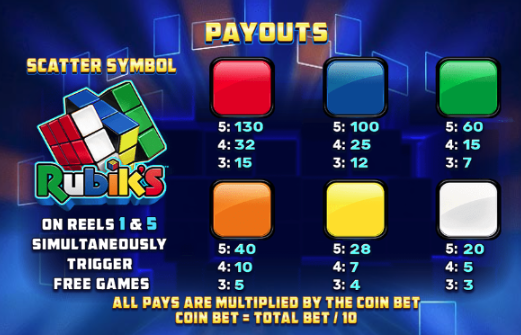 Invented in 1974 by Erno Rubik, the Rubik’s Cube is the toy/puzzle which just keeps on giving and it doesn’t appear to be going away any time soon; this online slot machine of the same name is developed by Playtech/Ash Gaming and from £0.10 per spin it offers players free spins and bonus features themed on the cube.

Rubik’s Cube is a five reel slot with three rows and twenty five fixed paylines; there’s a spinning Rubik’s Cube above those reels which we’ll explain shortly and a circle of mini-spotlights underneath which illuminate the whole setup.

The six high value symbols are squares in the Rubik colours – red, blue, green, orange, yellow and white while the lower values are 9 to A in similar hues. Wild symbols are formed as part of the Rubik’s Cube feature while the Cube symbol is the bonus icon.

On every spin the Rubik’s Cube above the reels spins and your hope is that the corresponding symbol positions on reels two, three and four match those colours; if they do they will turn wild for that spin.

If the Cube above the reels displays just one colour it will also apply a multiplier according to the pic below:

This is triggered by landing the Cube bonus symbols on reels one and five in the same spin; an extra free spin mode is unlocked each time the feature is triggered:

The Rubik’s Cube wild feature is also active during the spins but now those wilds will lock in place when they are created.

Rubik’s Cube is the official slot of this pastime and it’s a great tribute to the puzzle which we never managed to solve without breaking it apart; there are no such issues here – just an entertaining game with some clever gameplay and two themed bonus features.