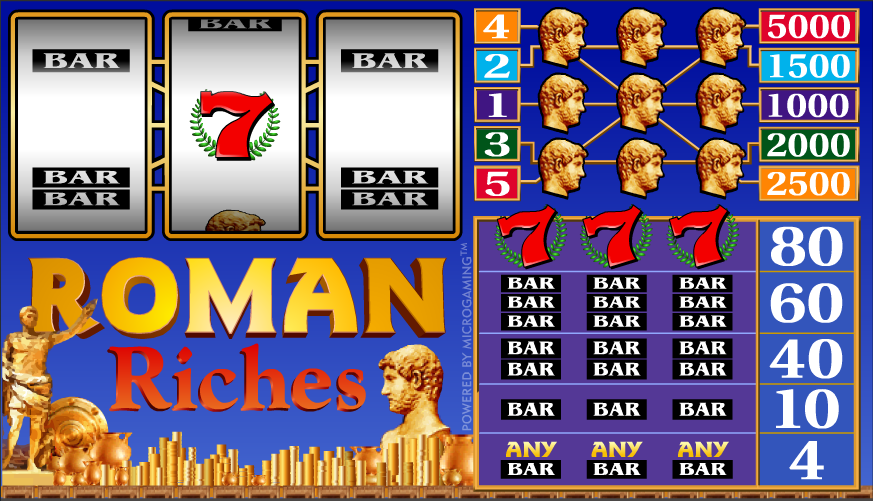 Two thousand years ago the Roman Empire was in full swing, holding sway over an expanse of land which covered Europe, North Africa and parts of Asia. This impressive civilisation would surely be delighted to know that they are now the focus of a classic online slot from Microgaming in the form of a game called Roman Riches. There are no extra features here but this is a game which will appeal to those who prefer something a little simpler.

Roman Riches has three reels, five paylines and like many Microgaming slots of a certain era it’s designed in a very specific way with the reels in the top left hand corner and the paytable information on the right hand side. An image below the reels shows a statue of (we think) Emperor Augustus overseeing stacks of gold coins and various treasures.

There aren’t many symbols here, just single, double and triple bars, sevens adorned with a wreath and then the head of Augustus. That head acts as a wild and it’s also the most valuable symbol on display, worth 5000x your line stake for three on payline number five – that’s bottom left to top right.

You can also earn a payout for three mixed bars on a payline and this will be worth 4x your line stake.

Get things started by choosing your line stake with the ‘+’ and ‘-‘ buttons below the reels. This is an amount between £0.25 and £5.00. Now you can decide how many lines you want active using the ‘Bet One’ button and this means your total stake will be between £0.25 and £25.00.

We’d recommend playing with as many paylines as possible because the prizes increase with each active line – i.e. payline five is worth 5x as much as payline one.

Roman Riches is a game for this who prefer simpler machines with no bonus features. It does a good job of replicating a traditional slot and even the sound effects are straight from a Las Vegas casino.