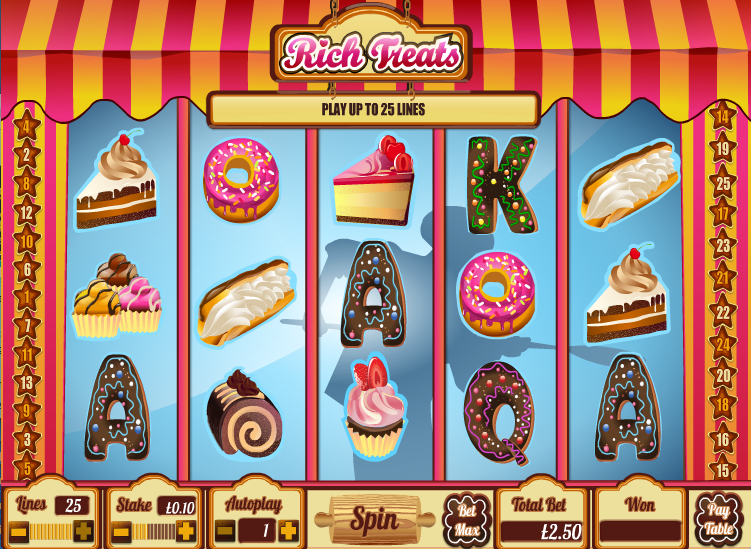 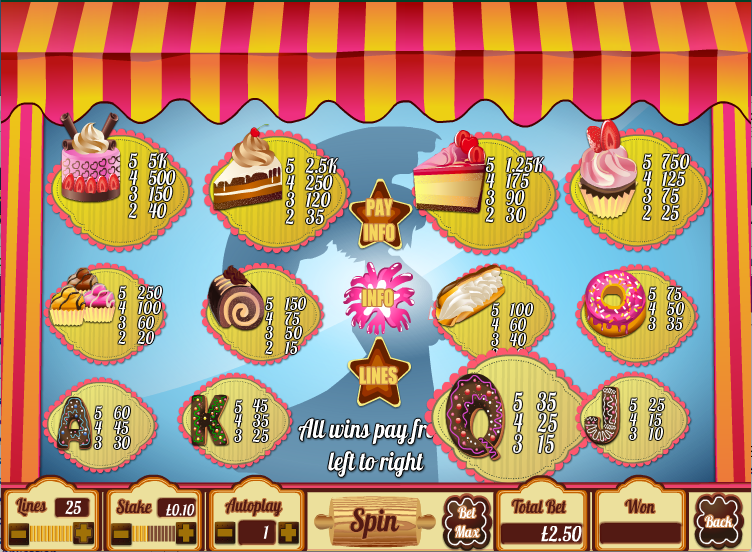 There’s a range of tasty treats on offer if you fancy a dabble at this online slot from Playtech; it’s called Rich Treats and although it may not be blessed with multiple bonus games it does include a base game feature which is always one of our favourites. Due to the nature of the snacks on offer this is probably not the game to play if you have the munchies of any description but read the full review below anyway for more information.

Rich Treats is a five reel slot with three rows and up to twenty five paylines and all the action takes place on a shopfront through which we can see the silhouetted shape of an employee performing some sort of task.

Unsurprisingly most of the symbols are cakes and sweets of one sort or another and these include cup cakes, eclairs, donuts, Swiss rolls and various other creations; J, Q, K and A are the lower value icons but they too seem to be decorated biscuits of some sort.

There are no special symbols such as wilds or scatters in Rich Treats.

This is always a favourite and it’s also known as ‘cascading reels’ or ‘collapsing reels’ in other slots; every time you land a winning combination those symbols involved will explode, leaving space into which other symbols fall. If those new icons help to make a winning combo then they too will disappear and this sequence continues until no more new wins are formed.

It’s (almost) like getting a free spin every time you land a win and that’s why we like it.

Rich Treats is admittedly a bit on the basic side in terms of graphics and animations but it’s bright and colourful and it comes with the groovy Exploding Reels feature. It’s worth a few spins at an RTP of 94.65%.