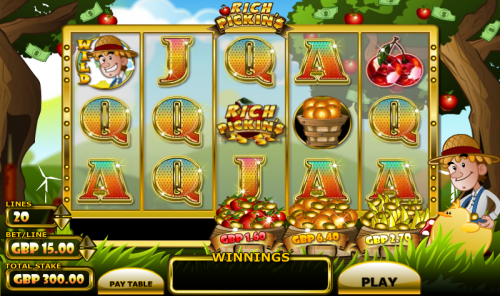 Imagine if you will an orchard deep in the English countryside from which the lucky farmer can harvest a range of sparkling fruit.  That’s the premise of Rich Pickins, a brand new online slot machine from OpenBet.  The lucky farmer is called Rich Pickins and he is the owner of this extremely profitable orchard where money literally does grow on trees.

There are five reels and twenty paylines available and some nice features which help this machine rise above the standard slot machine.  Everything sparkles in this game and even the standard J, Q, K and A have a freshly polished gleam about them.

Three  of the special symbols really sparkle though and we have diamond cherries, lemons and melons.  Additionally we have four baskets of non-sparkly fruit (bananas, oranges and tomatoes) plus a wild card which is Rich Pickins himself, a Rich Pickins logo and a Golden Apple icon on reels one and five.

The best feature revolves around the baskets of fruit and you can see from the screenshot above that there’s a basket of each under reels three, four and five.  Apples only land on reel three, oranges on reel four and bananas on reel five and when they do, fruit will drop into the corresponding basket underneath, increasing the cash value of each.

If you land all three fruits on the same spin the bonus feature starts; Rich Pickins loads the baskets in his truck and we head off on a journey in which we have to pick the route to market.  Two baskets will fall off on the way, leaving you with a cash prize for the remaining fruit.

The second feature is triggered by landing the Golden Apple on reels one and five and this will present you with three coins on the screen.

One coin will give you an instant cash reward.

One coin will start a game in which a bear shakes a tree to dislodge cash and other objects.  Eventually Rich dashes in to grab the prizes.

One coin will start the Beanstalk game in which you select a seed and watch it grow.  The higher it grows the greater the multiplier applied to the original win.  Now the beanstalk will start to grow flowers and leaves which increase the multiplier even more.

Apart from the innovative bonus games, Rich Pickins is notable for it’s crisp graphics, farmyard noises and array of cute animals which pop up periodically.  You can select between 1 and 20 paylines which means that the minimum possible bet is £0.01 while the maximum is £300.00 per spin.