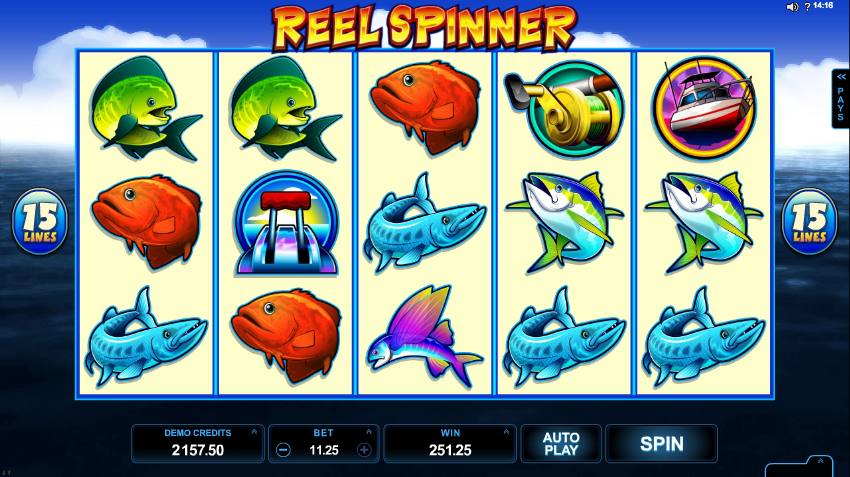 If you’re a fan of deep sea fishing but don’t really like leaving your house then this online slot from Microgaming may scratch that particular itch; you can stay dry, avoid sunburn and perhaps make a bit of cash in the process. It’s called Reel Spinner and you can read all about the essentials in the review below.

Reel Spinner is a five reel slot with three rows and fifteen paylines; most of the symbols are worried-looking fish and occupy reels which spin against a backdrop of a gently undulating seascape which is grim and dark in the foreground but becomes brighter as it merges into the cloudy horizon.

All the symbols are related to the fishy theme and include the fishing boat, a compass, a reel, the throttle and then five fish of various shapes and colours, all presumably trying to avoid the dreaded hook.

The Reel Spinner logo is wild and will substitute for all others except the silhouetted swordfish scatter icon which activates the main feature.

This is the only extra feature and it’s triggered by landing three or more of the swordfish scatter symbols anywhere in view; as you can see from the video above you will now be presented with a screen displaying six boats so just chose one to determine the number of free spins (up to 20). Then a reel will appear so click it and it will spin to reveal a multiplier (up to 5x).

The spins will now take place and during this round all wild symbols will be stacked to help you out with extra wins. When the spins are over you’ll be returned to the base game.

There’s not a great deal of creativity or innovation in Reel Spinner but it’s a colourful enough slot with some pretty fish and a fairly profitable free spins round. It also has an RTP of 96.38%.