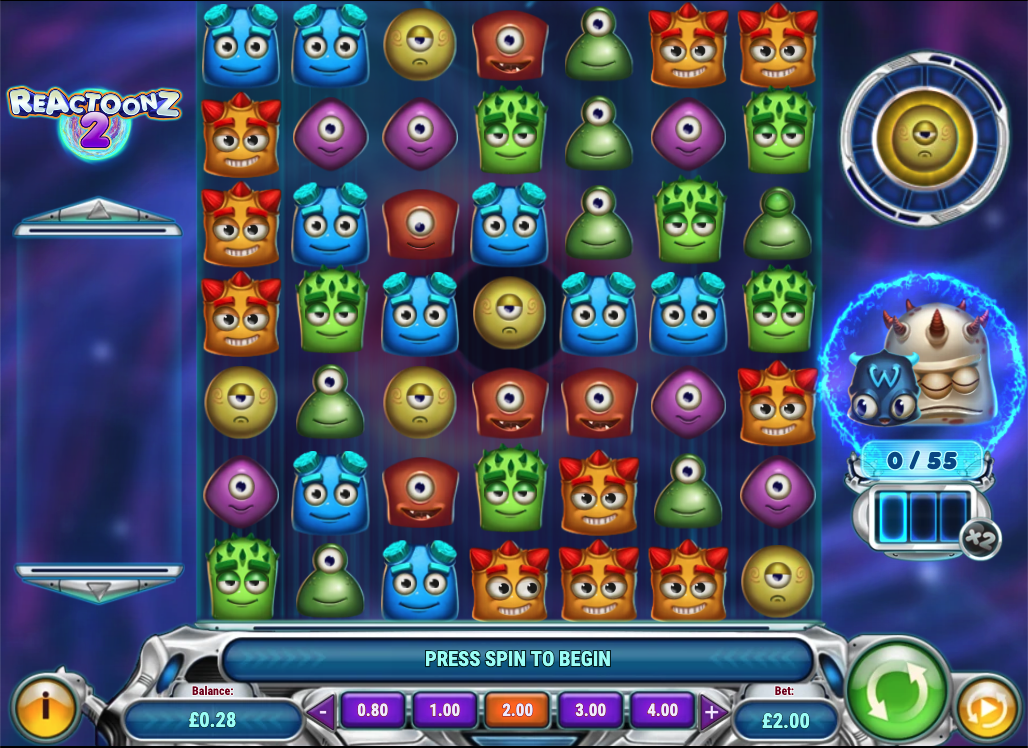 If you’ve previously enjoyed the colourful Reactoonz slot from Play N Go then you’ll be pleased to know there’s now a sequel called Reactoonz 2 – the basic gameplay remains the same but there are some exciting new features added in the the mix.

Reactoonz 2 plus out on the 7 x 7 grid you can see above and the task is to create clusters of at least five matching symbols which touch horizontally and/or vertically; those symbols involved will then disappear and be replaced by more falling in from above.

To the right are two meters which kick off the various bonus features and to the left all wins in the current spin will be listed.

The high value symbols are cute creatures in pink, green, yellow and blue while the lower values are four more critters but with only one eye each.

On each spin one of the lower value, one-eyed creatures will be selected as a ‘fluctuating’ symbol and shown in the meter in the top right – creating a win with these symbols will fill up the meter with the number involved in the win. If the meter fills up (with 11 symbols) then one, two or three Electric Wilds will be added back onto the reels. These act as wild symbols to hopefully continue the wins and they’ll disappear when used but if there are at least two left there’ll be a Wild Pair Explosion:

These are blank-looking wilds and they are not active but may become so if they are next to a winning combination at which point they turn into Electric Wilds.

The Quantumeter is the lower meter on the with hand side, it’s got four levels and it gets filled by creating wins with the Electric Wilds; it will reset after each spin but the following rewards are available by filling it up with symbols/charges:

Everything about Reactoonz 2 is a little bigger and better than the original version; the RTP is still a little low at 94.20% but if you an overlook that it’s an action packed and entertaining experience with some big wins hidden away in those meters.