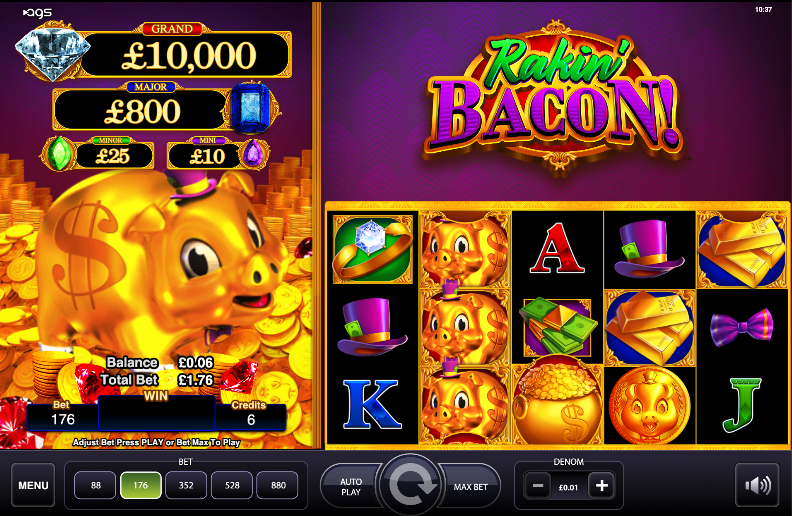 Golden pigs may hold all the answers to any budgetary problems you may have if this online slot from AGS is anything to go by – it’s called Rakin’ Bacon and our porcine friend stands ready to award free spins and jackpot prizes to lucky players.

Rakin’ Bacon is a five reel slot with three rows and the PowerXStream payline structure which means that symbols will form winning combinations as long as there are at least three on adjacent reels starting from the left hand side. The various jackpots are shown in the box to the left above the oddly-moving golden pig.

The high value symbols comprise the pig, a stack of gold bars, a diamond ring, wads of banknotes, a pile of gold coins, a purple top hat and a bow tie; J, Q, K and A represent the lower values.

The single gold coin is wild, it appears only on reels two, three and four and it will replace all other symbols to help form winning combos; the pot of gold coins is the bonus symbol.

This is triggered by landing at least three of the bonus symbols in a winning combo and you’ll now get to choose from one of the following free spins options:

There’s a chance to play the Jackpot Picking game each time a wild symbol lands on the reels; you’ll be taken to a screen with twelve coins displayed and all you have to do is select them until three matching ones are found which will correspond to the Mini, Minor, Major or Grand prizes.

Eagle-eyed players will note that Rakin’ Bacon is based on the same template as Fu Nan Fu Nu so aside from a different theme you’ll know what you’re getting here. Why mess with a winning strategy though? It’s good fun and designed to a high standard.