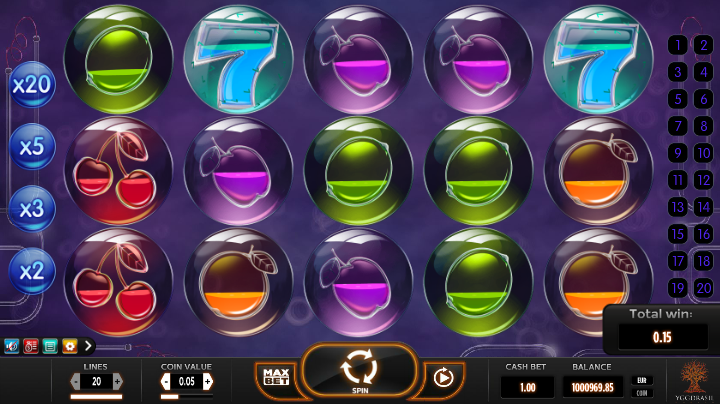 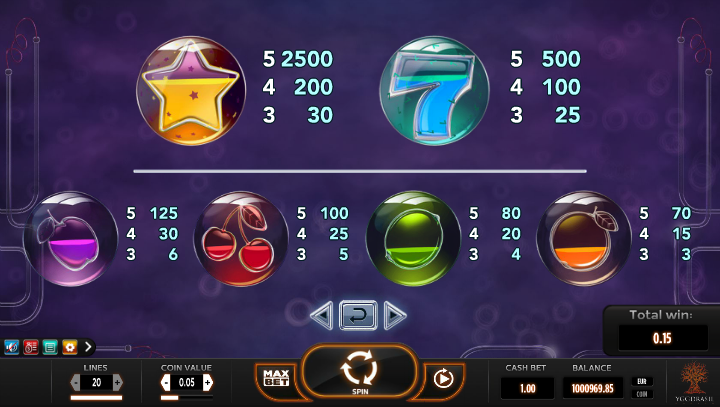 We like to play something a little different every now and then and even though Pyrons is without doubt a bone fide online slot, it’s gameplay is quirky enough to mark it out from other games. It’s from Yggdrasil Gaming, a company who are no strangers to creativity and we think it bears some similarities to releases from Net Entertainment which have no separate bonus features but squeeze everything into the base game.

Pyrons is a five reel slot with three rows and twenty fixed paylines; it’s a sort of electrically-themed design with various wires and pipes just about visible either side of those reels. There’s a purplish hue to the backdrop which sets off the symbols nicely.

There are just six base game symbols and these are of a traditional nature – oranges, lemons, cherries, plums, sevens, stars – but each is within a glass sphere. To add to the detail each icon is half-filled with liquid which sloshes about as they move. There are no wilds or bonus features involved in Pyrons. 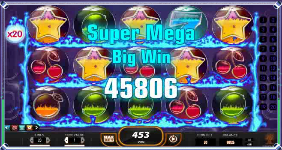 The base game is nice enough but it’s this feature around which Pyrons is based. It occurs each time the player lands a winning combination and it’s similar to the cascading symbols feature in various other slots.

Each time you land a win the symbols involved will explode in a colourful liquid splash; those involved will disappear to allow more symbols to fall into place – another winning combo will then produce the same result.

Additionally with each win the multiplier for the next prize will increase as follows : 2x, 3x, 5x and 20x. You will therefore need four consecutive wins to reach the 20x multiplier value. When you fail to land a win the multiplier drops back to it’s base level.

Pyrons is a simple game with some very addictive and enjoyable gameplay; it shows that it’s unnecessary to have countless bonus features to produce a compelling gaming experience. There’s a respectable RTP of 96.1%.