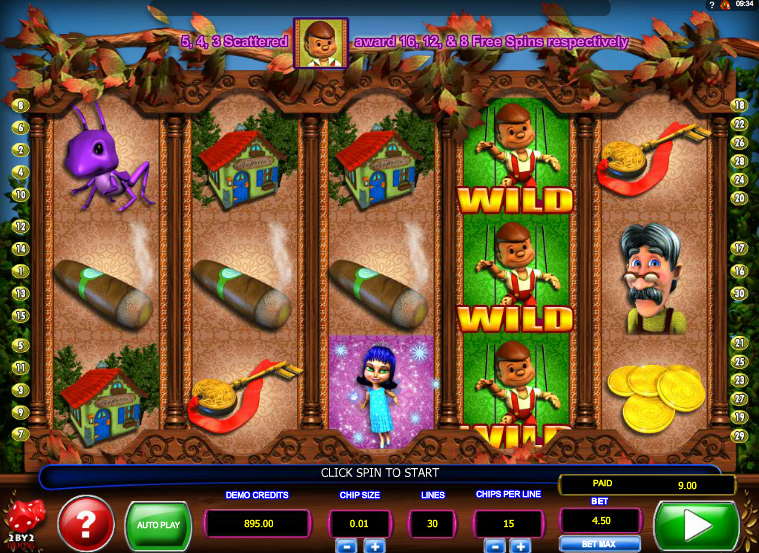 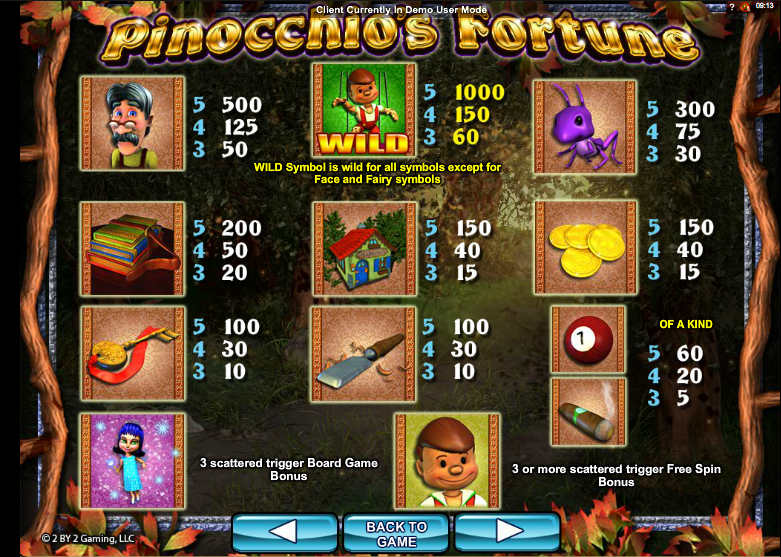 Back in 1883 an Italian writer named Carlo Collodi completed a children’s book called The Adventures of Pinocchio and it’s protagonist was a wooden puppet created by Geppetto. Pinocchio dreamed of being a real boy and is widely known for his nose which would grow if he told a lie. This story is the premise behind Pinocchio’s Fortune, an online slot from 2by2 Gaming with plenty of bonus features.

Pinocchio’s Fortune features five reels and thirty fixed paylines and the game is played inside a carved wooden frame of the type Geppetto would create. The symbols are related to the theme with a couple of exceptions and include a cigar, a pool ball, a carving tool, a gold key, gold coins, Geppetto’s workshop, school books, a purple and and Geppetto himself.

The Pinocchio puppet is wild and there are two scatter symbols – a close-up of Pinocchio and the fairy – which both have bonus games attached.

The fairy symbols appears only on reels two, three and four and if you can land three of her anywhere in view you will trigger this game. As you can see from the video above it’s a board game in which you have four spins to move as far along the path as possible. On the way you will earn prizes, multipliers, extra bonuses and more spins. If you can make it to the final square you will win the big prize.

This is a free spins round and it’s triggered by landing three, four or five of the Pinocchio scatters anywhere on the reels. You will receive 8, 10 or 12 spins respectively and the spins will begin.

During this round, each scatter symbol which lands on the reels will grow Pinocchio’s nose a little bit. When the round is over, each scatter collected will be worth one pick on the following screen which displays boxes. Each box will reveal a prize.

You will notice that some symbols on reels three, four and five also show a small puppet symbol. If you can land three of these on the same spin you will trigger this mini-game. You will be shown two puppets and must pick one; one is worth a cash prize and one will turn one of the reels completely wild and award a respin.

Pinocchio’s Fortune is good fun and only deviates from the original storyline a little bit (a pool ball?). Loads of bonus features liven things up and they seem to be triggered regularly enough. This is one to try.