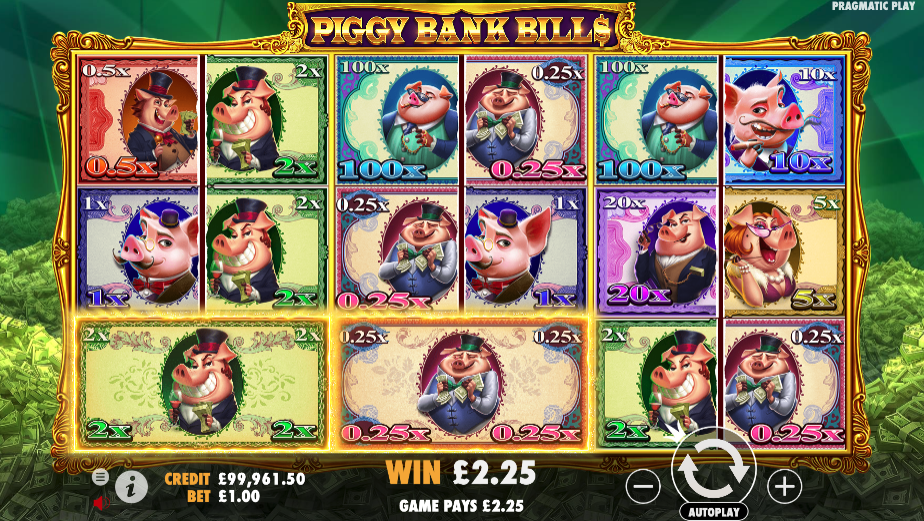 Piles of cash and some of our farmyard friends are the inspiration behind this online slot from Pragmatic Play – it’s called Piggy Bank Bills and it offers a clever, symbol-matching style of gameplay along with free spins and several random game modifiers.

Piggy Bank Bills is a six reel slot with three rows and the gameplay all takes place within ornate golden reels floating above a Scrooge McDuck-sized pile of cash; wins can be formed anywhere on the reels and there aim is to land two matching halves of the banknotes together which will award the stake multiplier shown.

The symbols are nine banknotes featuring posh pigs in various outfits along with a ‘Wild’ and a ‘Free Spins’ banknote. The wild will match up with another half or it can create its own winning symbol with two halves worth a random value.

During any spin one of the following mini-features might be awarded:

The Free Games symbols are what you’re looking for here and there are three ways to trigger the free spins – matching two scatter halves together, four halves or six halves. You’ll then receive eight free spins with the following:

Triggering with four or six halves will remove the lowest and two lowest value symbols respectively before the round starts. More spins can be retriggered in the same way.