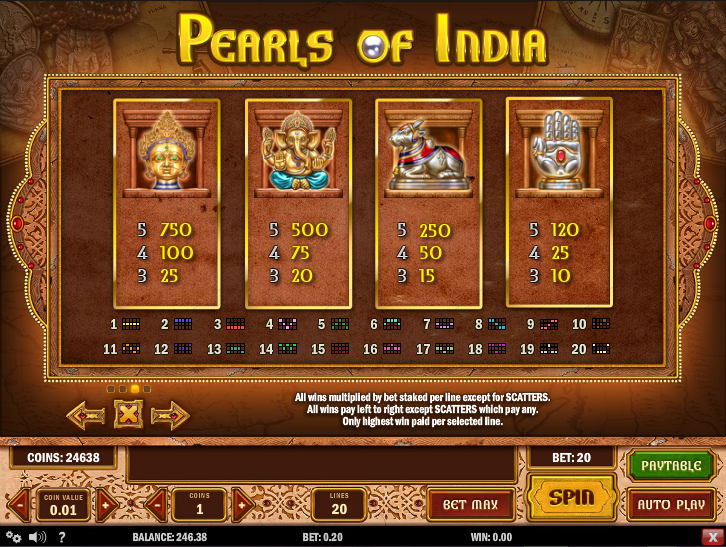 If you’ve previously played Aztec Idols (review) you may remember that the last time we saw the intrepid Rich Wilde he was searching for treasure in South America. Mr Wilde has now made it to India where he is searching for pearls in the appropriately named online slot, Pearls Of India. This is a Play N Go release with plenty of bonus features.

Pearls Of India is a five reel slot with twenty fixed paylines all set against a mountainous backdrop containing temples, palaces and blue skies. The symbols on the reels are all set into stone pieces which form columns when they land in place.

The four main symbols include Ganesh plus several gold and silver religious-looking items while 10, J, Q, K and A represent the lower values.

Rich Wilde himself is the wild symbols and there’s a pearl scatter which activates one of the features. The temple symbol triggers the second feature.

When you land a winning combo, those symbols will disappear to be replaced by more falling into their places. In this fashion you can land consecutive wins on the same spin; consecutive wins will also increase the multiplier you can see to the right of the reels to a maximum or 10x. The temple symbol will also disappear.

This is one of those handy bonuses which is guaranteed to trigger every so often. Every time you land a temple symbols anywhere on the reels it will help fill up the meter to the left of the reels. Once 25 have been collected you will play a mini-game in which you pick one of three temples to decide between the following features:

Landing three of the pearl symbols anywhere on reels one, three and five will give you ten free spins at the current multiplier level. During the spins you will collect a pearl every time one lands; collect five and you will get five more spins up to a maximum of 30. The pearl also acts as an extra wild during this feature.

Each win can be gambled by clicking the ‘Gamble’ button which appears below the reels. Try to double or quadruple your win by guessing the colour or the suit of the next playing card. The win limit is five guesses or 2500 coins.

We are always wary of gamble features as they are the quick way to destroy your bankroll. Gamble if you must but do it with great care.

This is another excellent Play N Go slot with a decent narrative and loads of bonus features. The spins are a little tough to trigger but there’s plenty of other extras to keep things interesting. Very enjoyable.