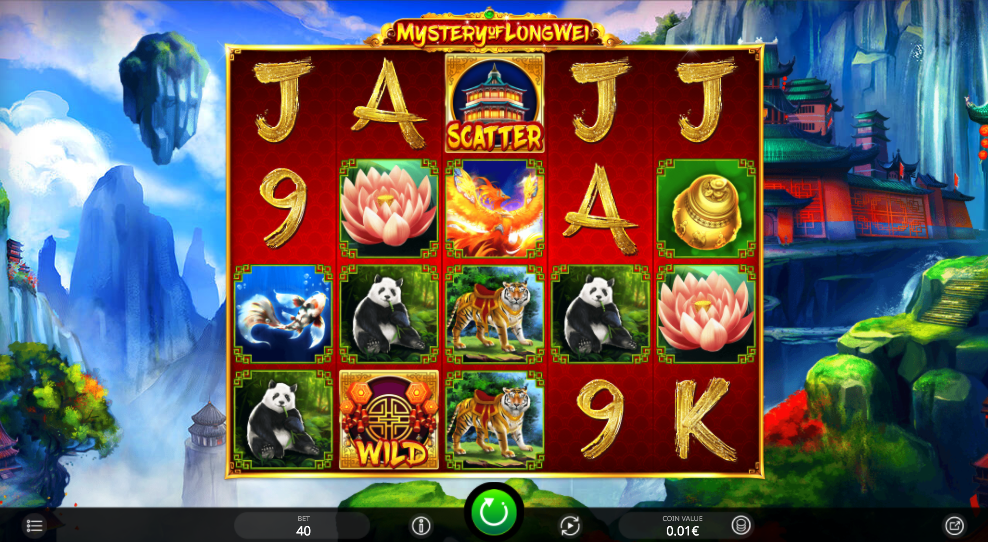 Some online slots reference a legend which may or may not actually exist and as far as we can tell Mystery of Long Wei is one such tale – it looks like it could be a genuine ancient story but we’re just not sure; anyway it’s developed by iSoftBet and you can read all about its colossal symbols and free spins below.

Mystery of Long Wei is a five reel slot with four rows and forty fixed paylines; the fantastical backdrop to those gold-framed reels features islands floating in the sky waterfalls, temples and huge mountains.

The higher value symbols include the phoenix, a tiger, a panda, a lotus flower, a Koi and a golden vase; 9, 10, J, Q, K and A make up the lower values.

The ornate drum is wild and it will replace all others to help form winning combinations except for the temple and dragon bonus symbols.

This is triggered by landing the dragon symbol anywhere on reel one; the dragon will now move down one position with each free spin and the round will end when it moves from view.

Colossal, 3×3 symbols will appear on reels two, three and four to try and help players out with big wins; more dragons can land on reel one to extend the round and when they do they will transform into a random standard symbol.

Trigger this by landing three, four or five of the temple scatter symbols anywhere in view for which you will receive ten, twenty or thirty free spins respectively. Unfortunately the spins can’t be retriggered but the colossal symbols appear on reels two, three and four on each spin.

Mystery of Long Wei is a slot with lots to like – it has some delicate good looks, an appropriate but unobtrusive soundtrack and two well-designed bonus features. Check it out!