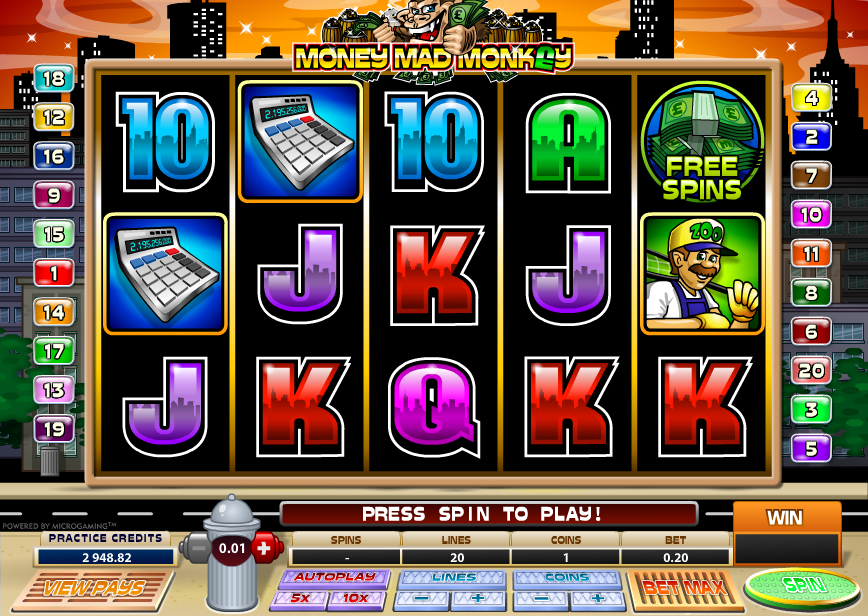 Here’s a challenge for you: try and play Money Mad Monkey for any length of time without mentioning Donkey Kong.  It’s almost certainly an impossibility but of course anything based on that most classic of video games deserves the highest respect so read on to find out what we think of this colourful online slot.

Money Mad Monkey is graphically a fairly basic-looking slot which features five reels and twenty paylines and the backdrop to the game is a cityscape at sunset, watched over by the monkey himself.

Aside from the low value playing card symbols we have a chap who looks suspiciously like (Super) Mario, a calculator, a peeled banana and a monkey.

The banana is a stacked wild and there are three more bonuses – a barrel of coins, wads of cash and a cityscape bonus symbol.

Lots of bonus symbols mean several bonus features and they are as follows:

The spins are triggered by landing three piles of cash on reels one, three and five; pick one and you will receive one of the following rewards:

Start the spins and away you go!  Unfortunately they can’t be re-triggered from within the feature. 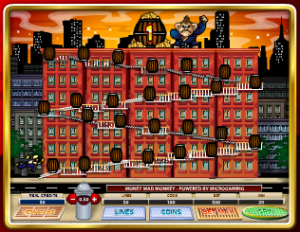 Three, four or five of the cityscape bonus symbols will start this feature and it’s a particularly Donkey Kong-esque game.  You have to climb the slope (as you can see in the screenshot to the right) by rolling the dice, collecting barrels of money as you go.  Roll a ‘Stop’ and the feature is over but reach the top for a big prize.

Landing three, four or five of the barrel scatter symbols will allow you to pick one of the barrels; this will reveal an instant prize reward which will be multiplied by your total stake.

The big money is to made by triggering the features but that’a all potluck and very little strategy.  All the features are triggered by scatter symbols so you can cut down your paylines and your stake if you’re only going for the bonuses.

Despite the slightly basic graphics this is an game made very entertaining by the Donkey Kong references and three bonus features. The jungle drums sound effects should also be experienced.