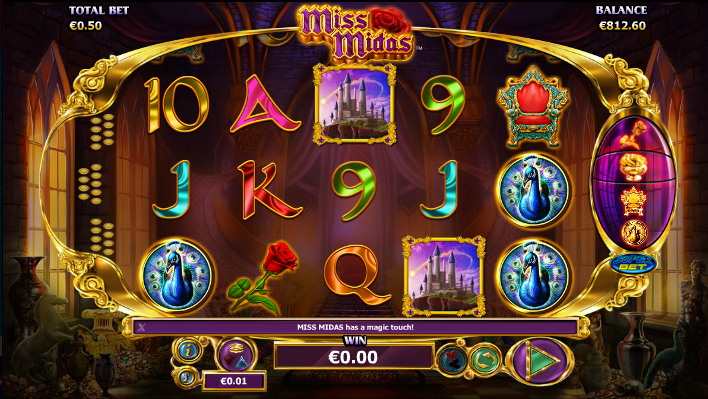 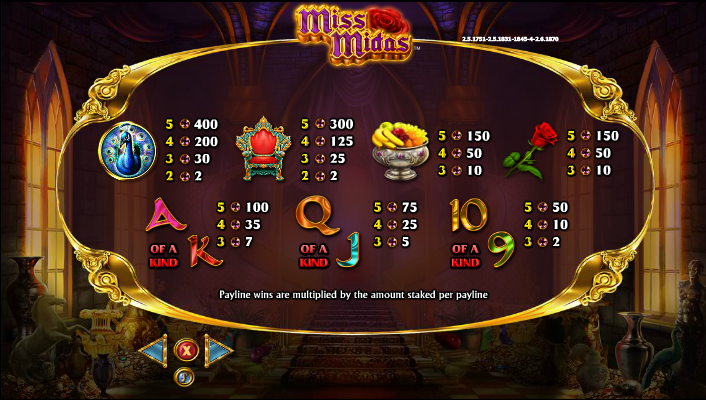 Hands up if you didn’t know that King Midas had a daughter; well you do now. King Midas was of course the legendary Grecian who turned to gold everything he touched and apparently he passed this gift/curse on to his daughter also. She is Miss Midas and that’s also the name of this online slot from NextGen Gaming.

Miss Midas is a five reel slot with three rows and twenty five fixed paylines; this game is set in the Midas palace where gleaming gold objects are clearly the decoration of choice.

Miss Midas herself is the wild symbol and she only appears on reel three; the scatter is a view of the palace and activates one of the features.

A number of NextGen slots include this feature and it allows players to increase their wager and receive extra benefits. Here it enhances the following feature:

Miss Midas is wild and appears only on reel three; she will turn certain adjacent symbols wild when she lands and those symbols depend on the level of your SuperBet:

This feature is triggered by landing three or more of the castle scatter symbols anywhere in view; you will receive the following:

The Golden Touch feature is enhanced here and each gold/wild symbol can now turn a neighbouring one wild also, as long as the SuperBet is used. The free spins can be re-triggered by landing three+ more castles.

Any win can be gambled by clicking the hearts/clubs button below the reels; try and predict the correct colour or suit of the playing cards to double or quadruple your win. The limit is five successful guesses.

As you can see from the RTPs listed above, there’s no real statistical advantage to using SuperBet; however it does add more excitement and the possibility of big wins, especially in the free spins feature.

We’ve enjoyed playing this slot; it has plenty of extras and some nice tidy graphics to keep us amused. It’s one of NextGen’s newer releases and well worth a go.