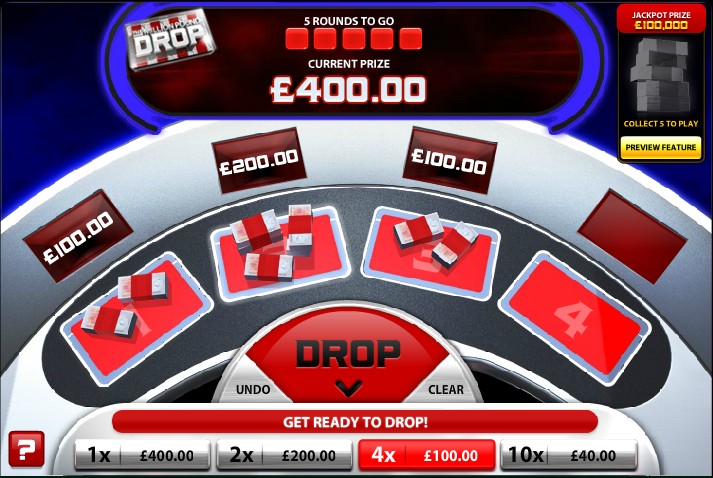 There are two very surprising things to write about the television game show known as The Million Pound Drop, firstly that it ran foe elven series and secondly that is somehow won a BAFTA award. We like a quiz show as much as the next person but this show was tedious in the extreme with questions being fired at the contestants at the breakneck speed of about two every 30 minutes. The game itself involved answering questions and then placing your winnings on four trapdoors, hoping that they wouldn’t open. Anyway Endemol have now developed a game based on this show and you can read all about it below.

The Million Pound Drop is essentially a very scaled down version of the TV show without any questions to get in the way; it takes place on the area of the television studio which contains the trapdoors. The game’s controls are located at the bottom of the screen while the current potential prize is shown at the top.

The first thing to do is to select your stake and then choose the number of trapdoors (two, three or four) and the number of game rounds you want to play (two to five). The more trapdoors and rounds you select, the higher the possible prize if you are successful in the end.

As for gameplay, all you have to do is place your starting money onto any number of trapdoors you choose after which random trapdoors will open and steal your money. That’s the first round over and if you have any money left you now place it once more on your chosen trapdoors. If you make it to the end of the preset number of rounds you will win whatever is left.

The Million Pound Drop is a very simple game to play and although a little bit lacking in creativity, it’s still more interesting than the original TV show – check it out if you want something brief and a little bit different. The RTP is 92.15%.