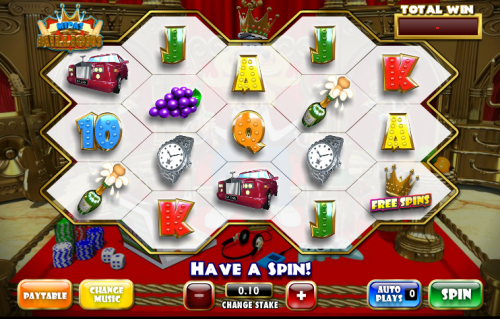 Not all the slots we review are in the style of the classic Las Vegas slot – some real creative thinking goes into some of the games and these can be a welcome diversion from the five reel and twenty or so payline versions we usually review.  Midas Millions from Ash Gaming is one such online slot so read on to find out more.

It’s sort of true to say that Midas Millions has got reels – five of them to be exact as you can see from the screenshot above, but it has no paylines as we would usually think of them.  Instead your task is to create groups of symbols and in this manner there are apparently 118700 ways to win.  Aficionados of 1980s student telly will notice the similarity between the reel layout and classic TV show Blockbusters.

When you play the game you will notice that the reels don’t spin; instead the symbols flip over to create the new pattern.  Those symbols, including the lower value 10, J, Q, K and A, look luxurious and we have a bunch of grapes, a champagne bottle with popping cork, an expensive looking watch, a posh car and a private jet.

There’s a free spins scatter symbol which activates the bonus game and a variety of different wilds which we’ll describe below.

Despite being a slightly unusual game we’re pleased to say that there’s a free spins round which can be triggered by landing three of the scatter symbols.

On each free spin King Midas can up up to two locking wilds to the reels which will then remain there for the duration of the feature.  This gives you loads more opportunities to create winning groups of symbols.

Midas Millions contains a number of wild symbols as follows:

Midas Millions is well worth some minutes of your time; there’s a solid soundtrack and the number of bonus wild features means this game has plenty of variety.