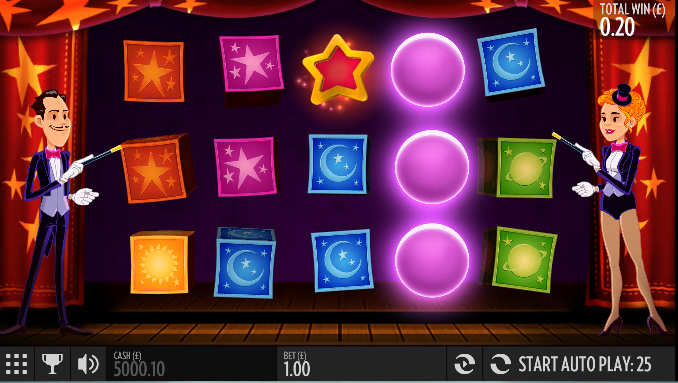 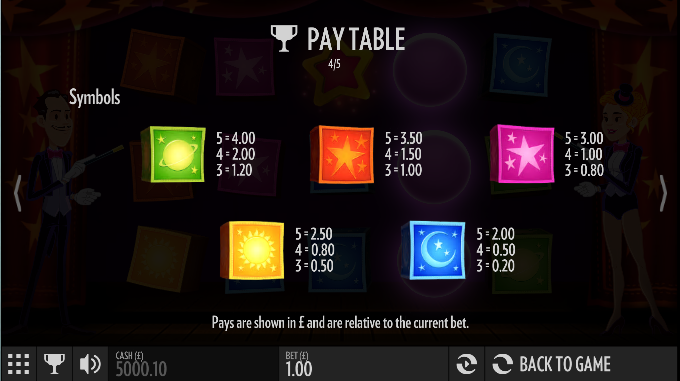 Everyone likes to see a bit of magic now and then – we know it’s nonsense of course but in the moment that doesn’t seem to matter and we can just appreciate it for what it is. Magicious is a brand new online slot from Thunderkick Games featuring two magicians, their wands and a traditional stage set of star spangled curtains and wooden floorboards.

Magicious is a five reel and ten payline slot set in some sort of small venue where our two magicians stand either side of those reels ready to zap anything that is a winning combination. All the symbols float in mid-air in a very pleasing way against the gloom of the backstage area and they are all nicely three dimensional as they bob and float without any visible support.

The symbols comprise five coloured boxes with magic-themed drawings on the front – blue crescent, yellow sun, pink and orange stars and a green planet. Slightly more valuable are two stars – blue and red – and then there’s a wild symbol represented by a glowing purple orb which is also the only bonus icon.

Wins can be formed right to left as well as left to right and each time you land one, the magician on the relevant side will flourish their wand and zap those symbols. 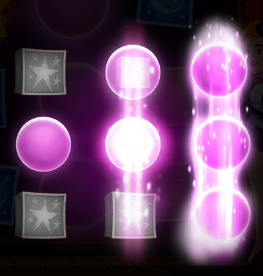 All symbols are stacked which means blocks of them can appear together on the reels and this goes for the wild symbols also. The wilds appear only on reels two, three and four and when they do, it will expand and fill all positions. Any wins will be paid and then you will receive one more free spin – you can see this happen in the video above.

Landing two or three wilds will mean two or three respins respectively and there are some big wins available if you can fill those centre three reels with wilds.

There’s no interactivity here and you can’t change the number of active paylines so we can’t really offer much advice but this is a lovely slot to look at so just set the Autoplay, sit back and enjoy the magic show.

The Thunderkick games we’ve played so far have been superb and Magicious is no exception; as Net Entertainment has constantly demonstrated, fantastic gameplay means lots of bonus features are unnecessary and that’s proved again here. We thoroughly recommend this game.