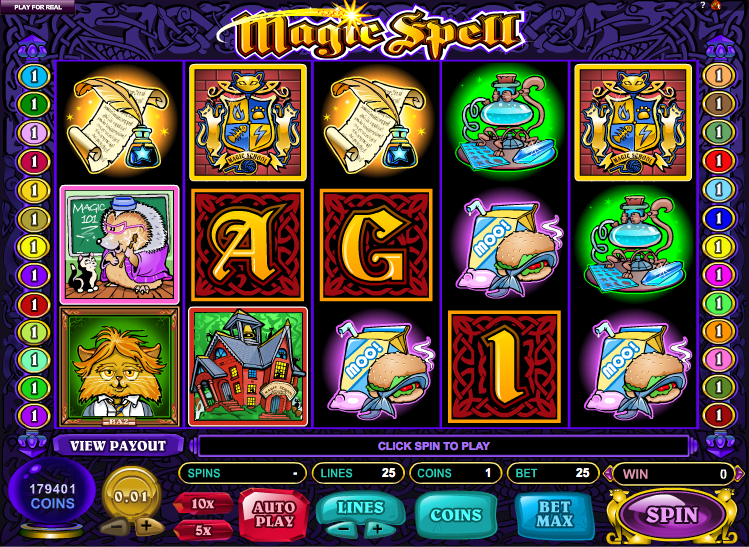 Magic plays a pretty big part when it comes to the development of online slots; if the theme is not one of magic directly, plenty of games include magical and fantasy elements which make the most of this subject. Microgaming’s Magic Spell is one of the games which places magic at it’s heart but it also contains cute animals and a creative bonus game.

Magic Spell plays out over twenty five paylines and five reels and there’s pleasingly ornate Celtic decoration in the background; the symbols seem an odd bunch but a closer look at them will reveal that the subject of the game is a Harry Potter-esque magical college of some sort.

Those symbols include a burger, a quill pen and ink, a beaker of some liquid, a school tie and books, a satchel, a hedgehog lecturer, the college itself and it’s coat of arms. There are also three student animal characters – Leo, Catrina and Baz – who each have their own backstory which can be read within the paytable.

Bonus symbols are a Master Tom wild and a letter on each reel which spells out the word MAGIC.

If you can spell out the letters MAGIC on reels one to five then you’ll trigger this brief game; it might be over quickly but it can also lead to the Secret Library Game.

Once the letters have landed on the reels, you can pick one to reveal a bonus win amount; behind one letter is a key which will earn you access to the next stage of the game as described below.

If you make it this far you will be shown five shelves of books with each shelf containing five books. You start picking from the bottom shelf and may find the following:

The feature is triggered by scatter symbols so if you just want to play with minimum paylines and small stakes, that won’t harm you chances of activating the bonus game.

This is a very cute-looking slot which has been designed to a high standard; we like it but it does seem tricky to activate the bonus feature – if that’s why you’re playing then there may be better options.