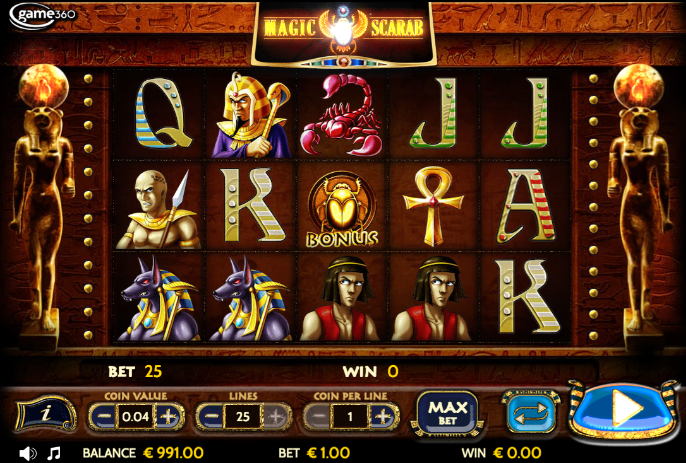 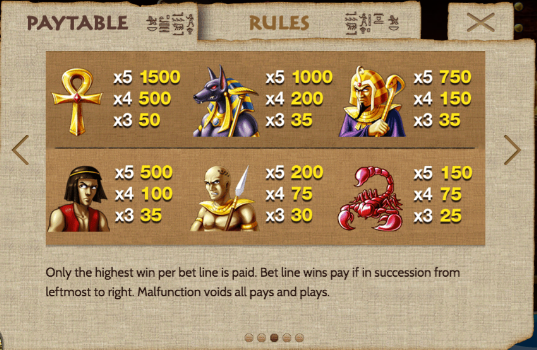 Ancient Egypt is clearly the place to visit as a fan of online slot machines and there’s no shortage for those who appreciate a game based on that gang of interestingly-named gods; Magic Scarab is one more to enjoy, it’s developed by Game360 and you can find out how it works below.

Magic Scarab is a five reel slot with three rows and up to twenty paylines; the design is very neat with glowing statues either side of the reels and a complex hieroglyphic sentence on the lintel above the symbols.

There are six high value symbols and they represent a range of Egyptian gods, a golden Ankh and a red scorpion; J, Q, K and A are the lower values but fashioned in an Egyptian way.

The wild symbol is a blue scarab beetle and it will substitute for all others to help form winning combos except for the Eye of Ra scatter and the golden beetle bonus icons.

This is triggered by landing three, four or five of the Eye of Ra scatter symbols anywhere in view for which you will receive 5, 10 or 15 free spins respectively. All wins during this round are multiplied by 2x except for any extra spins retriggered by more scatter symbols.

Trigger this by landing three of the golden beetle symbols anywhere in view and you get to play a picking game which involves working your way through to a treasure room with large stake multipliers on offer.

This is a feature triggered by landing the thief (right) to the left of the golden Ankh on the middle row for a payout of 10x your total bet.

Magic Scarab is a worthy addition to the massed ranks of Egyptian-themed slots with it’s neat, intricate design, interesting sound effects and variety of bonus features – check it out!