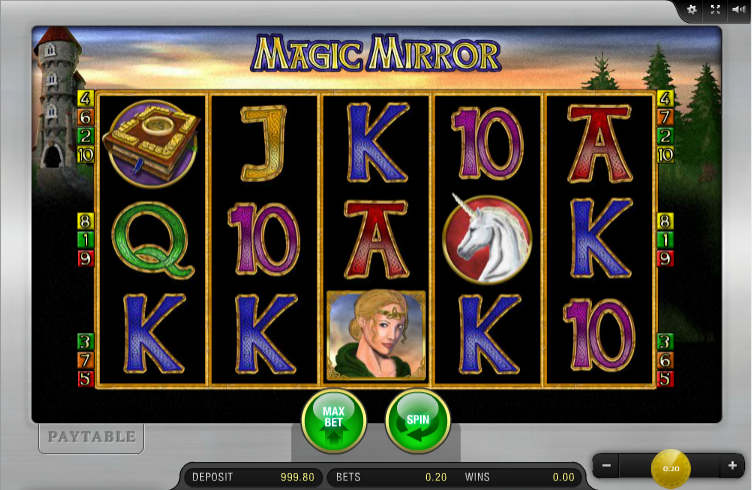 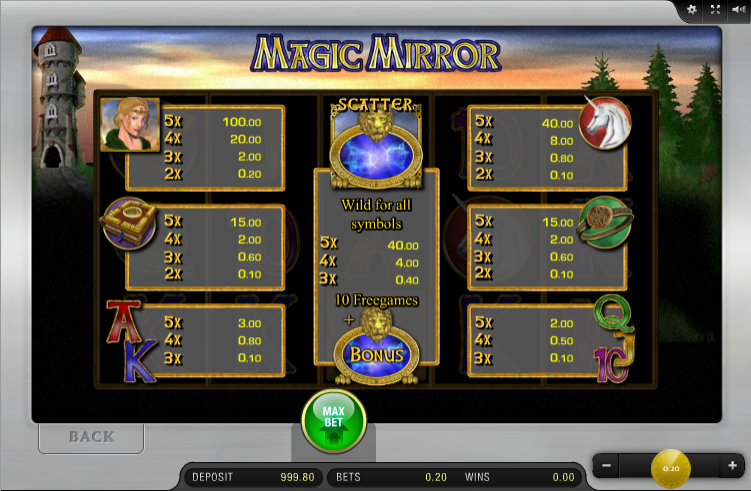 Some online slots allude to certain themes without being specific and perhaps that’s because there are intellectual property issues with using certain names. Usually it’s pretty obvious what’s going on though and that seems to be the case with Magic Mirror, a game developed by Merkur Gaming. Magic Mirror seems to refer to the mystical one in the story of Snow White but there are one or two other fairytale items mixed into this game – read all about it below.

Magic Mirror is a five reel slot with three rows and ten fixed paylines; the plain bronze reels sit against a background of a forest under a setting sun but over on the left hand side there’s something which looks suspiciously like Rapunzel’s Tower.

There are four high value symbols including the princess, the unicorn, an elaborately bound book and ring; 10, J, Q, K and A are the lower values.

The shimmering blue Magic Mirror is the wild symbol which substitutes for all others; it’s also the scatter which is the key to the free spins.

This is triggered by landing three or more of the Magic Mirror scatter symbols anywhere in view; you will now receive 10 free spins but to begin with one of the symbols will be randomly selected. If you land a win during the spins then this symbol will expand to fill positions on that particular reel.

Magic Mirror is not the type of slot that’s going to keep you interested for too long but it you like the style of Merkur game then you’ll probably appreciate this release. The free spins round is welcome and there’s an RTP of 95.94%.