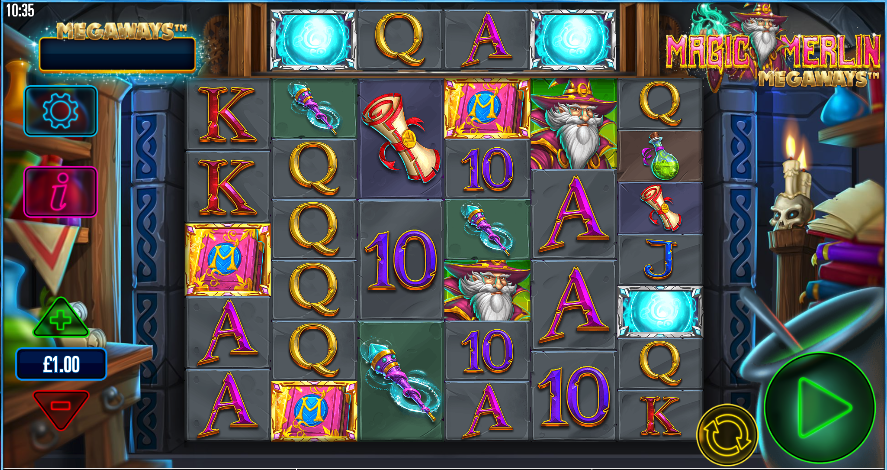 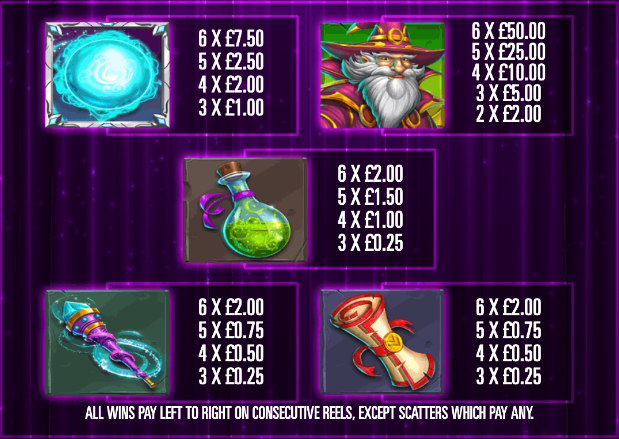 Merlin, the magician from Arthurian legend takes centre stage in this online slot called Magic Merlin Megaways; it’s developed by Storm Gaming Technology and along with plenty of free spins it comes with more than one hundred thousand ways to win courtesy of BTG’s Megaways payline structure.

Magic Merlin Megaways is a six reel slot with up to seven rows, one horizontal reel at the top and 117,649 ways to win – this huge number is made possible because of the various symbol sizes, up to seven on each row. The action takes place in Merlin’s lab where potions are brewed under candlelight.

The high value symbols comprise the blue vortex, Merlin, a green potion, a scroll and Merlin’s wand; 10, J, Q, K and A make up the lower values.

The wild is a big, yellow ‘Wild’ which will replace all other standard symbols to help form winning matches while the spell book is the scatter symbol.

Each symbol in a winning combination will disappear to be replaced by more falling in from above – more combos can then be formed and this process continues until there are no more wins.

This is triggered by landing four of the spell book scatter symbols anywhere in view for which you will receive twelve free spins – any additional spell books will award an extra five spins.

There’s a win multiplier of 1x when the spins begin but with every subsequent collapse this increases by 1x; during this feature there’s an extra crystal ball scatter symbol on the horizontal row and landing three or four of these will award an extra 5 or 10 free spins respectively.

Collapsing reels and Megaways is a recipe for a successful slot and Magic Merlin Megaways is certainly enjoyable; there’s a great fantasy soundtrack, an amusing cartoonish graphical style and some potentially big wins in the free spins.