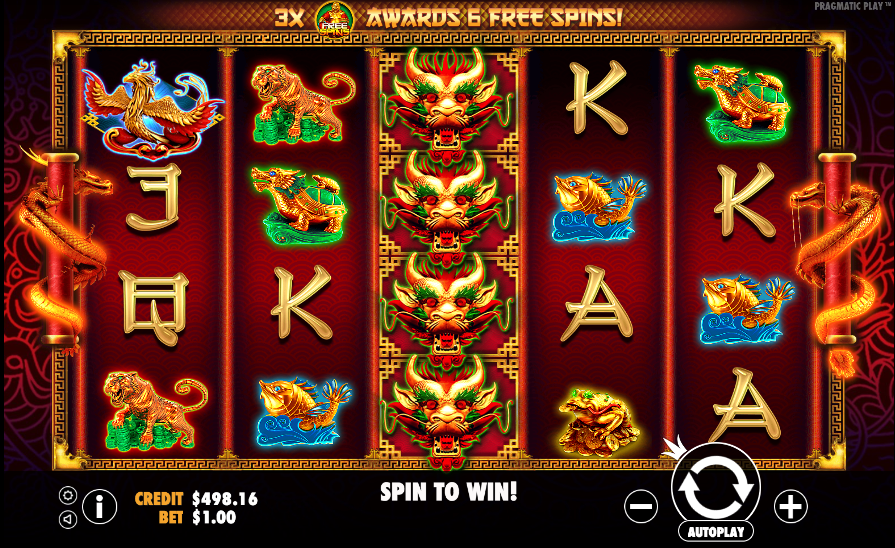 Stylised golden animals, a golden Buddha and glowing dragons can mean only one thing – it’s time to check out another online slot with an oriental theme; this one’s called Lucky Dragons, it’s developed by Pragmatic Play and it comes with some funky free spins.

Lucky Dragons is a five reel slot with four rows and fifty fixed paylines; an ornate golden frame surrounds those reels which sit against a gloomy backdrop with neon red decoration. Dragons coil round the right and left sides to complete the effect.

The higher value symbols include the dragon’s head, a dragon with unfurled wings, a lion, a smaller dragon, a toad and a Koi; J, Q, K and A represent the lower values.

The gold coin is wild and it will replace all others to help form winning combinations except for the golden Buddha scatter symbol.

This is triggered by landing three of the golden Buddha scatter symbols anywhere in view for which you’ll receive an initial six free spins; that may not sound like many but each Buddha which lands during this round will award one extra spin and in our experience they land regularly.

In addition one wild symbol is added to reels two, three and four before each spin so as you progress through this round the wins should gradually increase. We found that the number of spins was at least doubled each time this feature was triggered because of the extra Buddhas landing.

Lucky Dragons is a slot with a very high level of graphics and animations; it only offers the one extra feature but it’s not too tricky to trigger and there are some big wins when the stacked wilds start kicking in. Check it out – it comes with an RTP of 95.19%.