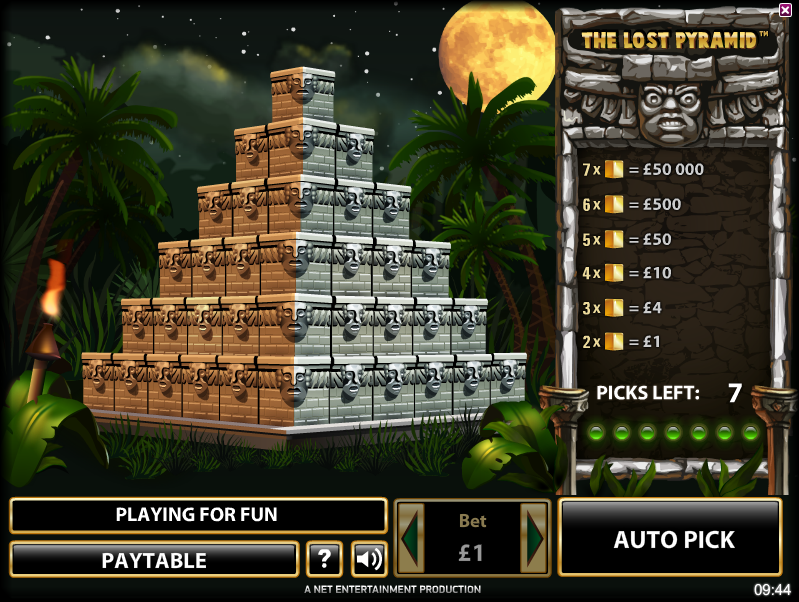 If those constantly spinning reels are starting to get a little bit hypnotic then perhaps it’s time to try something a bit different. All the casinos we recommend have a section of ‘Arcade’ games which can act as an engaging diversion from the slots and The Lost Pyramid is one such game. It’s developed by Net Entertainment and while the gameplay is extremely simple it has a strangely addictive quality. Read on for more information.

When you first load up The Lost Pyramid you will be faced with a screen containing the pyramid; it’s six stories high and each of the thirty six blocks has a face carved into it. An Aztec-looking jungle scene surrounds the structure and a large yellow full moon illuminates the whole scene. Some relaxing jungle sounds accompany your gameplay but ti sounds a bit like there’s something sinister loitering just out of view.

On the right of the screen is the paytable which shows you how much you could win with some correct picks.

The first thing to do is set your stake level and you can bet £1 or £2 per game. You then have to click the ‘Buy Game’ button and then you can begin. You now have the chance to pick seven of the blocks in the pyramid and you are trying to find the shining gold ones. At least two are needed for a win but the prizes are listed here below:

With a maximum bet of £2, there’s a massive £100,000 prize available for picking seven gold blocks.

If you’d like to play the game a bit faster, there’s an Auto Pick option which means you don’t have to pick each block individually.

This is an enjoyable enough diversion although it does seem quite hard to pick up regular wins; this is perhaps borne out by the rather low RTP of 92.00% but it’s worth trying out if you need a short break from the slots.