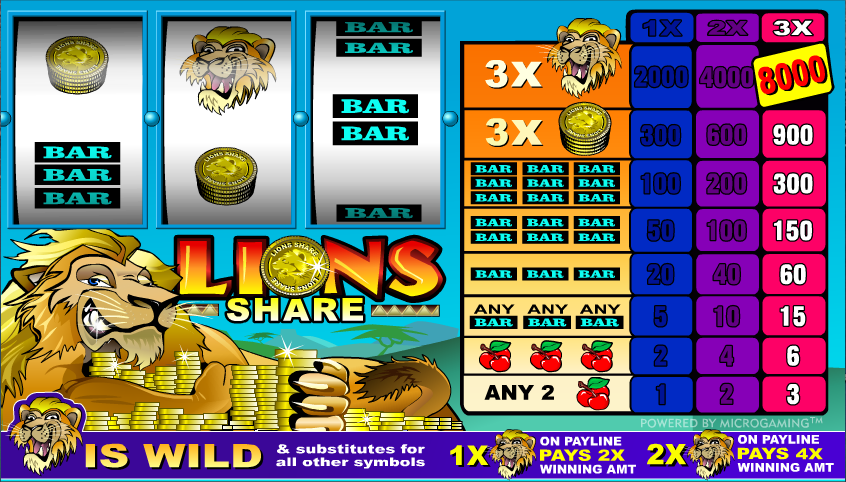 Sometimes it makes a change to take a look back at some of the online slots we used to play when we first signed up at our favourite casinos. Microgaming slots have been around for a long time now and clearly things have moved on in terms of quality and creativity since 1998 but as far as classic slots go, there still plenty of enjoyment to be had from these older games.

Lion’s Share is a three reel game with just one payline and it’s all about the savannah-dwelling hunter who roams the plains. This particular lion is a bit more sophisticated though and appears to value his stash of gold coins. The picture below the reels shows him languishing on a pile of gold, teeth glinting in the sunshine.

Back to the game though and the paytable on the right of the screen displays the range of symbols on show. These include cherries, single/double/triple bars, a pile of gold coins and the lion himself. The lion is the wild and the most valuable symbol – worth a potential 8000x your stake for three on the payline.

Payouts are won in the usual way with three matching symbols but it’s also possible to grab a payout in the following ways:

Once you’ve selected your basic stake using the ‘+’ and ‘-‘ buttons underneath the reels you can change the coin selection using the ‘Bet One’ button. This gives you the option of doubling or tripling your stake and your potential payout.

Take note here though because you will see that all prizes are doubled/tripled except for the top payout of three lions which is 4x the basic payout. This means there’s an extra financial incentive for using the maximum coin level. If you want to do this the minimum stake would be £0.75 per spin.

You certainly get what you see with these older Microgaming slots but that doesn’t mean they don’t serve a purpose. Lion’s Share remains a playable game with a nice big payout for the luckiest players.