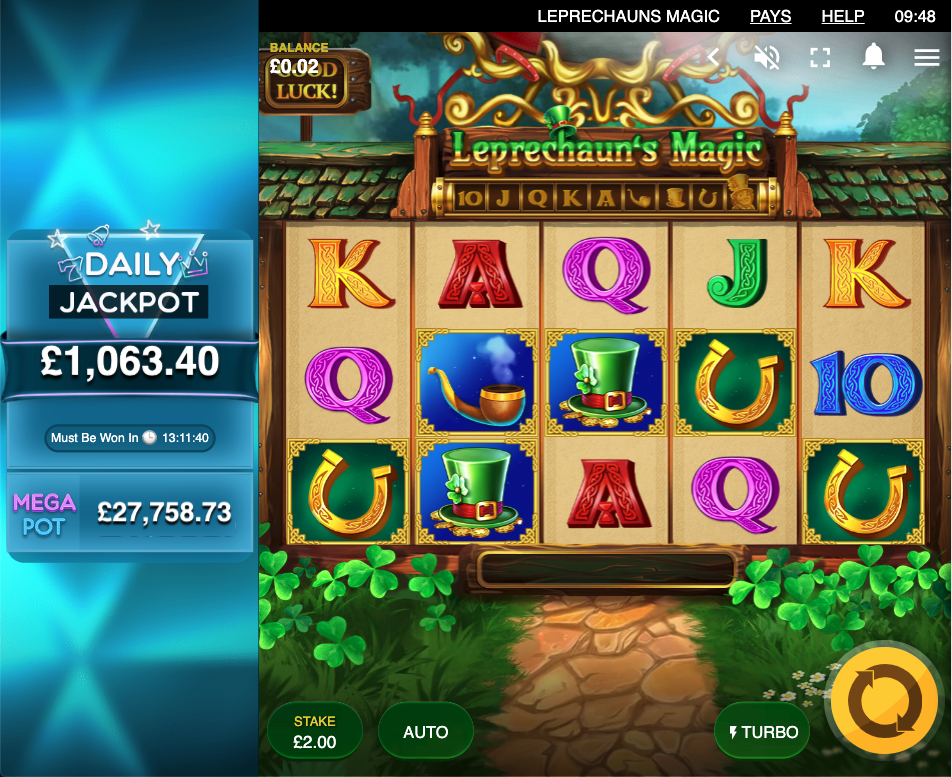 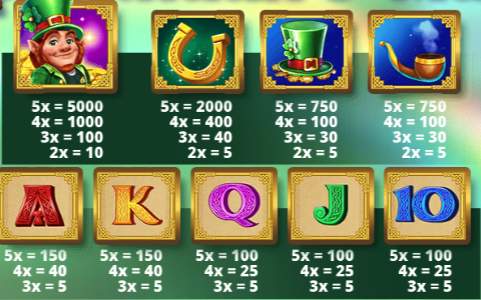 Good reasons to visit Ireland include the beer, the scenery and of course the weather but those of a spiritual nature may also enjoy Leprechaun’s Magic which also happens to be the name of this online slot from Red Tiger Gaming; read on to find out about the free spins and progressive jackpot.

Leprechaun’s Magic is a five reel slot with three rows and ten fixed paylines; those reels spin on a rickety wooden structure beneath which large four leaf clovers are growing, presumably bestowing good luck on all those who pass this way.

The four high value symbols include the leprechaun, the horseshoe, the top hat and the pipe while the lower values are represented by 10, J, Q, K and A.

There’s no wild symbol in Leprechaun’s Magic but the pot of gold is the scatter symbol which activates the main feature.

Each time a winning combination is formed the symbol is noted on the row above the reels and on the next spin it becomes a gold symbol – this symbol will expand on that next spin if a win is made possible by doing so and these symbols don’t need to be on adjacent paylines, there just needs to be the minimum number on a payline to create a win.

Landing three of the pots of gold anywhere in view will grant a spin of the wheel (which awards 4 to 16 spins) plus an extra 4 for any extra triggering symbols. More scatters can retrigger this round an unlimited number of times and any expanding symbols created remain in force until the round ends.

A combination of extra spins and expanding symbols meant we won an impressive 288x our line stake on the first stab at the free spins.

We might be swayed by the big win on the free spins but this is a really solid game made better by the expanding symbols – the free spins and progressive jackpot are the icing on the Irish cake.