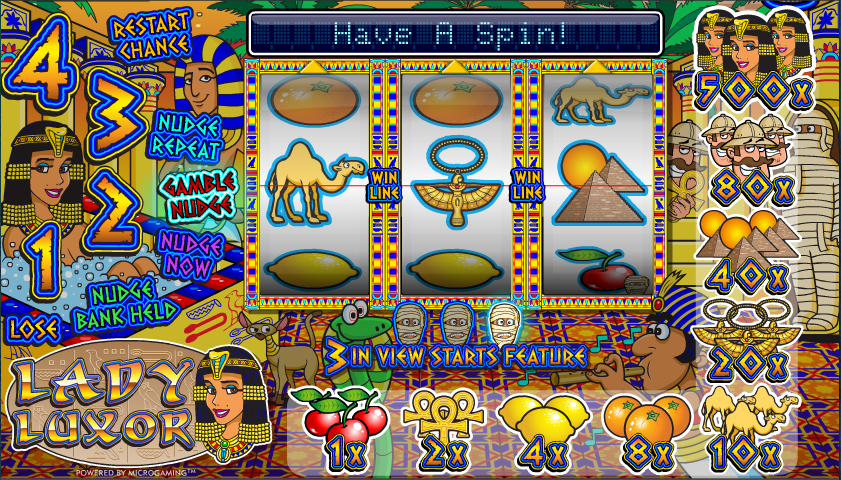 We’ve been playing a lot of Microgaming’s fruit machine-style online slots recently and almost without exception they’re good fun, especially if you’re a veteran of the type of machines you still see in the corner of pubs. Lady Luxor is the subject of this review and it joins a growing genre of games with ancient Egypt as it’s theme.

Lady Luxor is a three reel and single payline slot based on ancient Egypt but also on the grave-robbing habit of early explorers such as Howard Carter, the discoverer of the tomb of Tutankhamun. The symbols are a combination of traditional ones such as cherries, lemons and oranges and theme-related ones such as ankhs, camels, pyramids, the explorer and Lady Luxor herself. She’s worth 500x if you can land three of her on the payline.

If you’ve played Cops and Robbers Classic then you’ll already know what to expect from this feature – you’ll need to  land three of little Mummy heads (they’re attached to some of the main symbols) anywhere in view to trigger it and you’ll be whisked to the screen you can see below.

Just click the ‘Spin’ button to set your character running off up the game board and hope that you don’t get caught by the Mummy. You can collect the prize you land on or take a risk and spin again to try and win something bigger. Prizes include multipliers, nudges, Winspins and there’s also a mystery square which will usually end your game.

Nudges are awarded to players randomly and allow you to jog single reels down in the hope of collecting a winning combo or collecting the Mummy heads. Nudges nay occasionally be gambled, repeated or banked for one more spin.

Holds allow the player to freeze 1 – 3 reels in the hope of creating a win on the next spin.

The Shifta feature will occasionally pop up after a non-winning spin and rearrange the reels into a winning formation.

If you see these words written on the notice board above the reels, don’t be tempted to use the Holds – just press Spin and a win will be the result.

Winning the feature should be the focus of your efforts so use nudges and holds strategically to collect the Mummy heads. When you’re in the feature don’t try and get all the way to the top, collect what you’ve won after one of two spins. 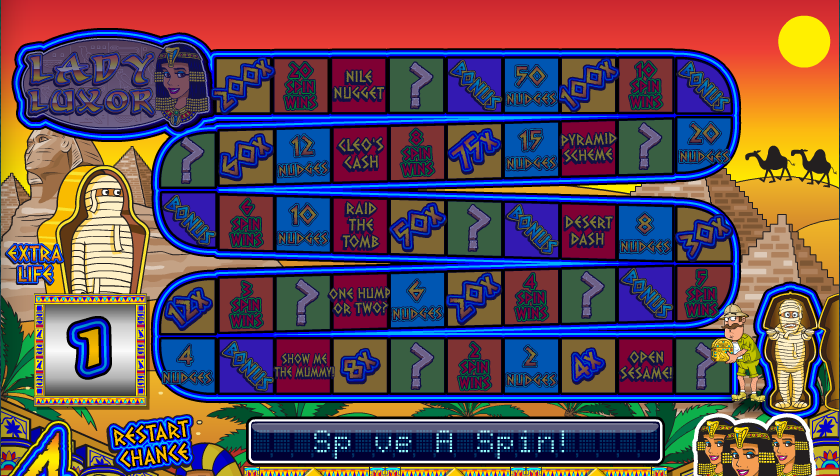 This is a great game and the only drawback is the difficulty of making it any distance up the game board in the feature; the fruit machine-style game play is excellent and the ghostly voices in the sound effects are effective.