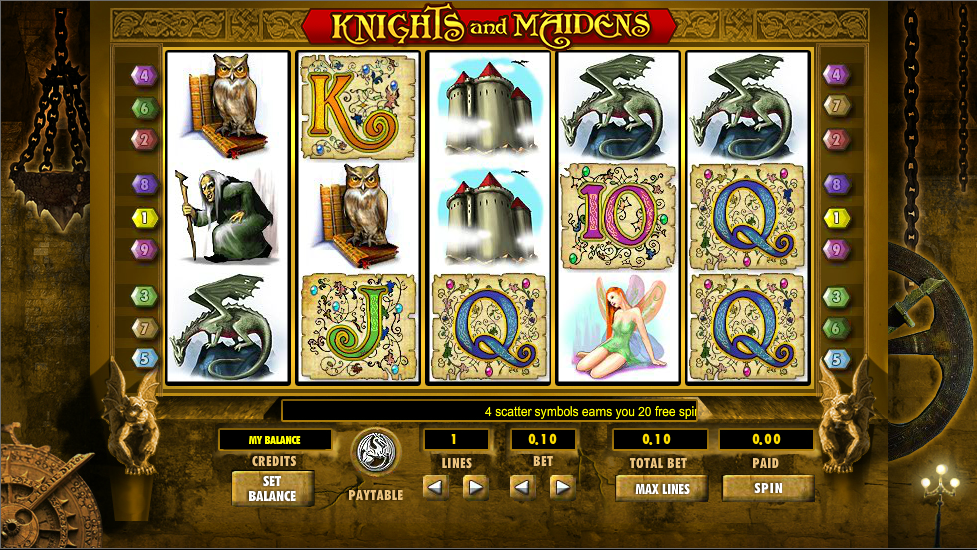 At first glance, Knights and Maidens might appear to be an online slot based on some mythical era of chivalry but that’s only part of the story; this Random Logic game also features some additional extras which insert a level of fantasy into the proceedings. Dragons, wizards and fairies all make an appearance and their presence is welcome in a good-looking slot with two bonus games.

Knights and Maidens contains twenty five paylines spread out over five reels and it’s all set inside an ornate frame which is itself placed in some sort of gothic castle.  Even the lower value 10, J, Q, K and A are beautifully embroidered while the main symbols are an owl, some sort of hunchback, a fairy, a dragon and a castle.

The wild symbol is represented by the wizard, the Knight is the scatter symbol and the main bonus game is triggered by the blonde-haired maiden.

Landing three or more of the Knight scatter symbols anywhere on the reels will reward you with the following:

Thirty free spins would of course be nice but in reality you’re more likely to trigger the lower amounts.  There’s no extra multiplier for this feature but the spins can be re-triggered while you’re playing it.

This is a funky little mini-game  which is activated by landing three or more of the maiden symbols on an active payline.

You’ll now get to try and rescue the girl by making your way through a number of levels, picking the correct items as you go.  The further you progress the more the items are worth but if you pick ‘Game Over’ then that’s the end of the fun.

The more paylines you play, the more chances you’ll have of triggering the Cavalier’s Quest which can only be activated by landing the correct symbols on an active payline.  To avoid confusion it should also be noted that although the download version of the game has twenty five paylines, the Instant Play one has just nine.

This is a really nice looking slot with some great graphics and animations and two bonus features.  It has some strangely grating sound effects but you can also use the mute button.