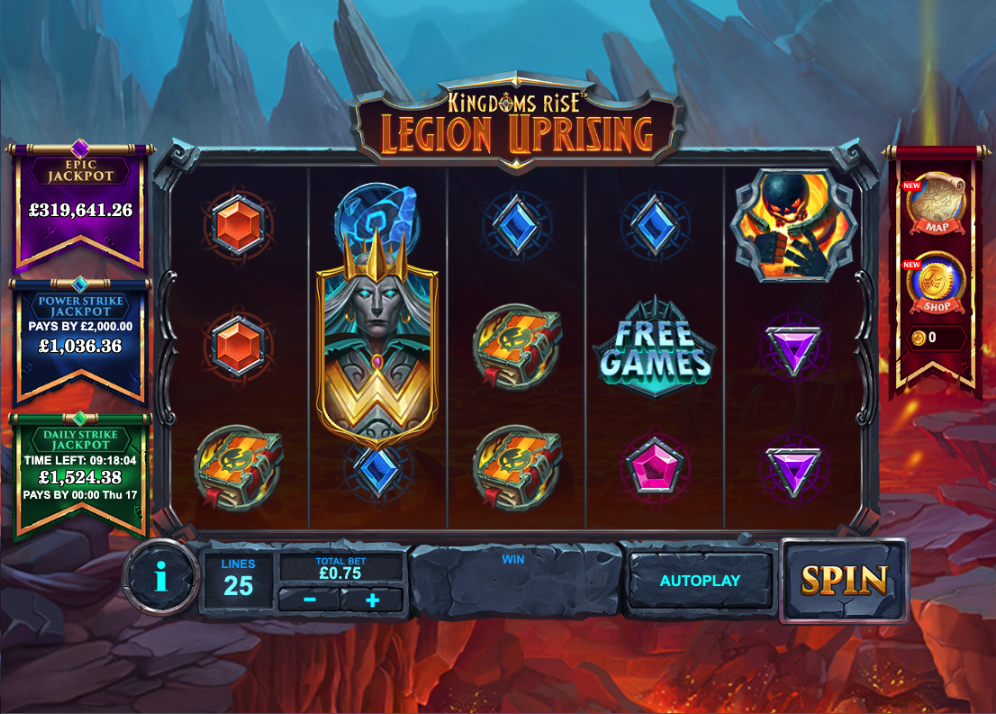 Playtech’s imaginary world of Kingdoms Rise continues its ever-expanding narrative and here we’re in the company of Legion Uprising, by our estimation the tenth outing in this fantasy-themed set of online slot machines; as always it will come with three progressive jackpots, access to the bonus features from all the other Kingdoms Rise games and a free spins round all of its own.

Kingdoms Rise: Legion Uprising is a five reel slot with three rows and twenty five fixed paylines; lava and rock form the dramatic backdrop and there are the bonus of giant animals peeking out from the fiery liquid.

High value symbols include the dragon, the fiery skeleton, the green-eyed girl, the book and the blue, carved rock; gems in orange, pink, blue and purple make up the lower values. The queen is wild and she appears stacked on the reels while the Free Games symbol is the scatter.

Landing at least three of the Free Games symbols anywhere in view will trigger this feature and award ten free spins; there’ll be a stacked wild symbol locked on to reel three during this round and with each two spins the win multiplier will increase by 1x (it starts at 2x). It’s not possible to trigger any more spins from within this feature.

The free spins round is where the big wins are and the progressive jackpots are great but the Kingdoms Rise series is really all about the ability to access all those bonuses from the other games, as long as you have sufficient game tokens.