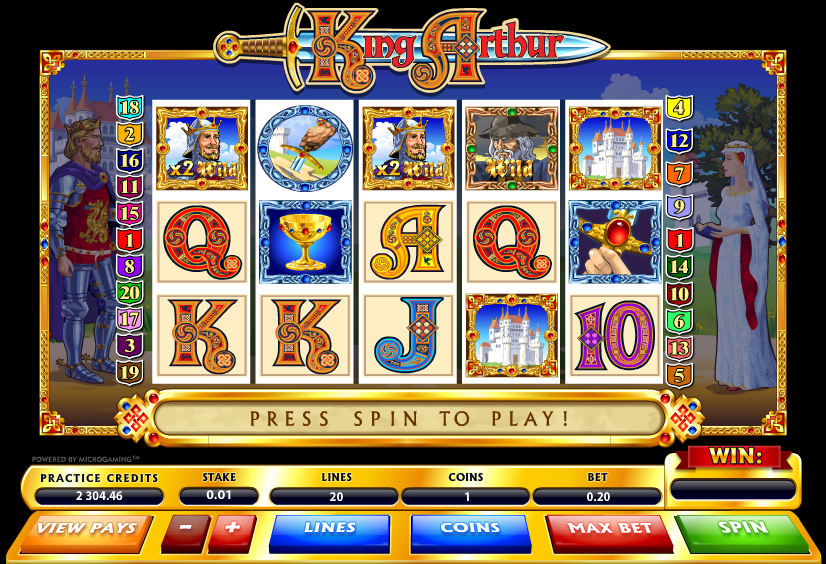 King Arthur features five reels and twenty medieval paylines and this is a very nicely designed game; to the right and left of the reels stand Arthur and Guinevere and the artwork all over the screen is lovely, particularly Arthur’s sword Excalibur which hangs over the reels.
The legend of King Arthur and the Knights of the Round Table is one of the most enduring in British history; it combines magic and mysticism, good and evil and there’s also the faintest clues that the character of Arthur may have been based to some degree on a real person – Geoffrey of Monmouth was probably the best person to ask.  Anyway, Microgaming have taken on board the challenge of making a King Arthur-themed online slot and here it is.

Bonus symbols include King Arthur and Merlin wilds, a sword in the stone scatter and the castle of Camelot which activates the Quest Game.

Other symbols include the Holy Grail, the Lady in the Lake and 10, J, Q, K and A stylishly designed.

In our experience this is a an easy to trigger, but hard to profit from, bonus feature.  You need to land three, four or five of the Camelot bonus symbols on an active payline and you’ll then be transported to a view of Camelot with various paths and entrances worth a variety of multipliers.

You will now get to guide Arthur left or right for the first two choices after which he will make his own way, hopefully to an entrance worth up to a 4x multiplier.  We kept landing on 0x but perhaps that was just bad luck.

Both Arthur and Merlin act as wild symbols in the base game but if Arthur contributes to a winning combo he will double the prize award.

Sword in the Stone Scatter

Three, four or five of these bonus symbols landing anywhere on the reels will start an interesting little feature; one by one Arthur will try to pull the sword free and if he does, it’s worth an extra multiplier.  This can be worth up to 32x with five scatters and five successful pulls.

We played with smaller stakes to allow ourselves more spins and so more chances of activating one of the two main bonus features.  They’re both pot luck but the Sword in the Stone feature was the more profitable for us.

We like this game, a couple of innovative bonus features, some appropriate music and a selection of motivational phrases underneath the reels kept us smiling.  It also manages to squeeze in every King Arthur-related fact out there.