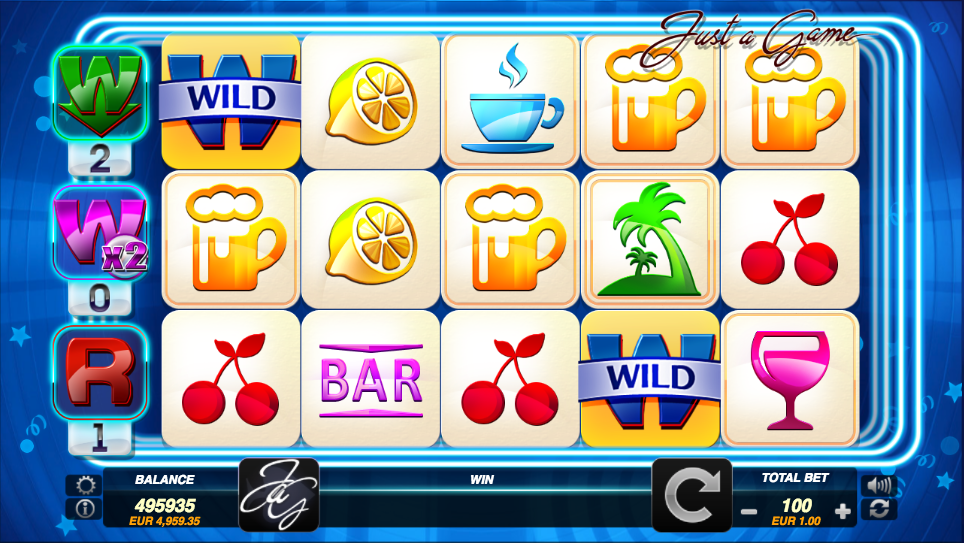 There’s a holiday vibe to this colourful online slot machine from Fuga Gaming Technologies but really the theme is a bit vague – there’s some fruit, a cup of coffee, a beer – so you can probably make up your own backstory. Anyway it’s called Just A Game and you can read all about it below.

Just A Game is a five reel slot with three rows and twenty fixed paylines; blue neon tube lights surround those reels which spin on neat cream tiles. On the left hand side are feature meters which we shall explain in more detail shortly.

The stylised symbols are all related to the theme and include the sun, some palm trees, beer, wine, a cup of coffee, pink Bars, lemons and cherries.

There are no wild symbols in Just A Game, just a big gold question mark which is the key to all the extra features.

This is where that golden question mark comes in handy and on each base game spin up to five can land on the reels; they will then randomly transform into one of four matching symbols to award one of the following mini-features:

Each time a Wild Multiplier, Expanded Wild or Respin lands on the reels their respective meter on the left will increment by one; when all three have a value of least one you’ll be awarded seven free spins with eight extra bonus symbols on the reels, bringing the total up to twenty three,

Despite a slightly vague theme we think that Just A Game is a little bit more than that – the feature is very clever and something we’ve not seen before and it means that there’s always something going on. This game comes with an RTP of 96.00%.