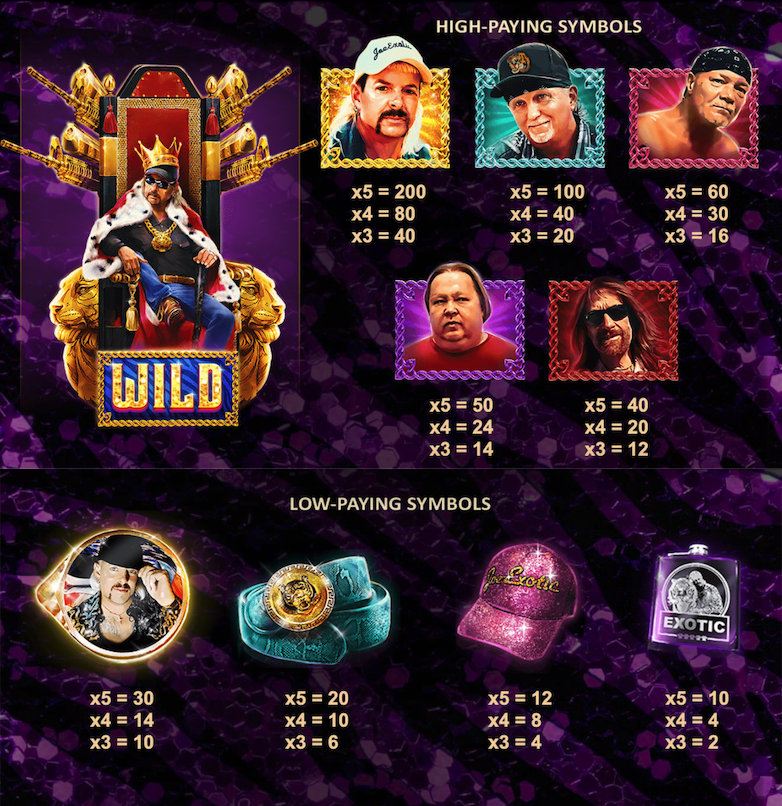 We won’t pretend to know much about Joe Exotic but a bit of research tells us that he’s some sort of disgraced, celebrity zoo keeper from Oklahoma who’s now in prison for various offences. Don’t let all that put you off this online slot from Red Tiger Gaming though because it comes with various picking features, base game bonuses and three progressive jackpots.

Joe Exotic is a five reel slot with four rows and twenty fixed paylines; big cats, animal cages and guns create a wild backdrop to those reels, showcasing the gigantic ego of the main man.

The high value symbols include various characters from this bizarre story along with a snakeskin belt, baseball cap and an engraved hip flask. Joe in his throne is the wild while Joe with his tigers, his election banner and a golden tiger are the special symbols.

This is triggered by landing three of the Vote Joe symbols on reels one, three and five and you’ll play a picking round until three matching candidates have been found; finding three Joes awards the biggest win of 150x the stake.

This is activated by landing three golden tigers on reels one, three and five and Joe will now offer up four options; one will be picked for you for a stake multiplier win of between 5x and 50x.

This can occur randomly in the base game or free spins and all low value symbols will be removed, allowing high value symbols to fall in from above for a bigger potential win.

This is triggered from the base game by landing three of the jackpot symbols which will award either the Daily, Super or Hourly Drop prizes. Daily and Hourly Drops must be won within the time shown.

This is an action-packed game themed on a very strange character who’s now going to spend most of his life behind bars; there are bonuses galore and three progressive jackpots so it’s definitely worth a few spins.

The Return To Player percentage for Joe Exotic is 95.70%.

How To Win On Joe Exotic?

Where can I play Joe Exotic?