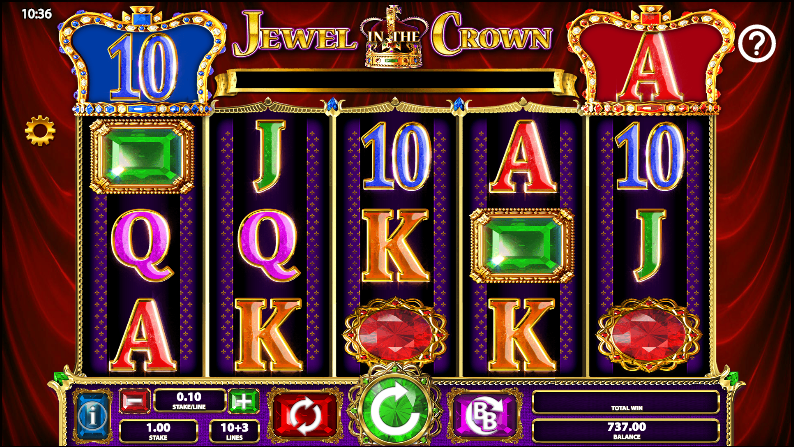 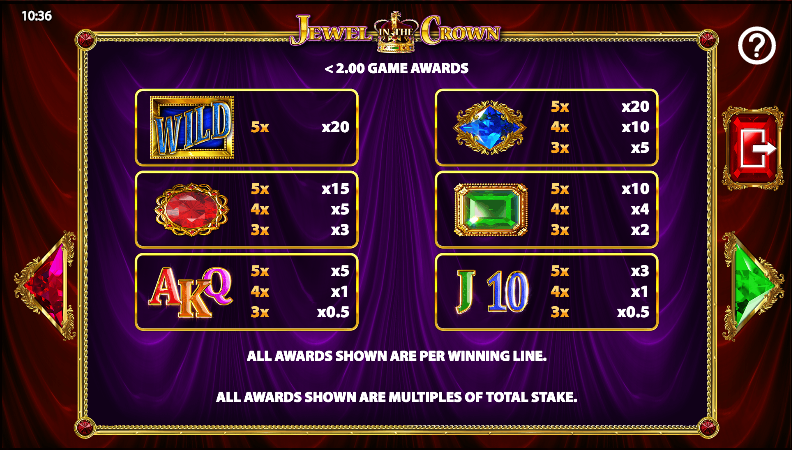 Some online slot machines make no bones about the fact that they’re trying to tempt us with glimpses of expensive items that could be ours if we could just hit the right combination of symbols; Jewel In The Crown is one such game, it’s full of polished gems, it’s developed by Barcrest and it’s explained in detail below.

Jewel In The Crown is a five reel slot with three rows and variable paylines; the design is basic but the gold rimmed reels are full of sparkling stones and plush purple trimmings. Reels one and five have an extra position shaped like a crown (red & blue) which rises above the others.

The blue, green and red gems are the higher value symbols while the lower values are represented by 10, J, Q, K and A.

There’s a blue/gold wild symbol which will substitute for all others to form winning combos except for the crown bonus icon.

This is triggered by landing three of the crown bonus symbols anywhere on reels two, three and four in the base game; the symbols which are in blue and red crowns above the reels become wild and stacked respectively for the eight free spins you are awarded. One, two or three crowns landing during the free spins awards 1, 3 or 8 additional spins.

Any  bet above two coins increases the paylines available from thirteen to All Wins Pay where adjacent symbols on a payline without the need for starting from the left hand side.

The Crowning Glory Trail involves collecting crown bonus symbols during your five spins which are added to the meter above the reels; collecting five or six will award 8 or 16 spins respectively. With Super Crowning Glory, three crowns completing the trail will award 16 free spins.

These Barcrest slots are certainly idiosyncratic but enjoyable nonetheless; it’s worth noting that playing the Big Bet increases the RTP to 98.00% so it’s worth playing with the extra stake.